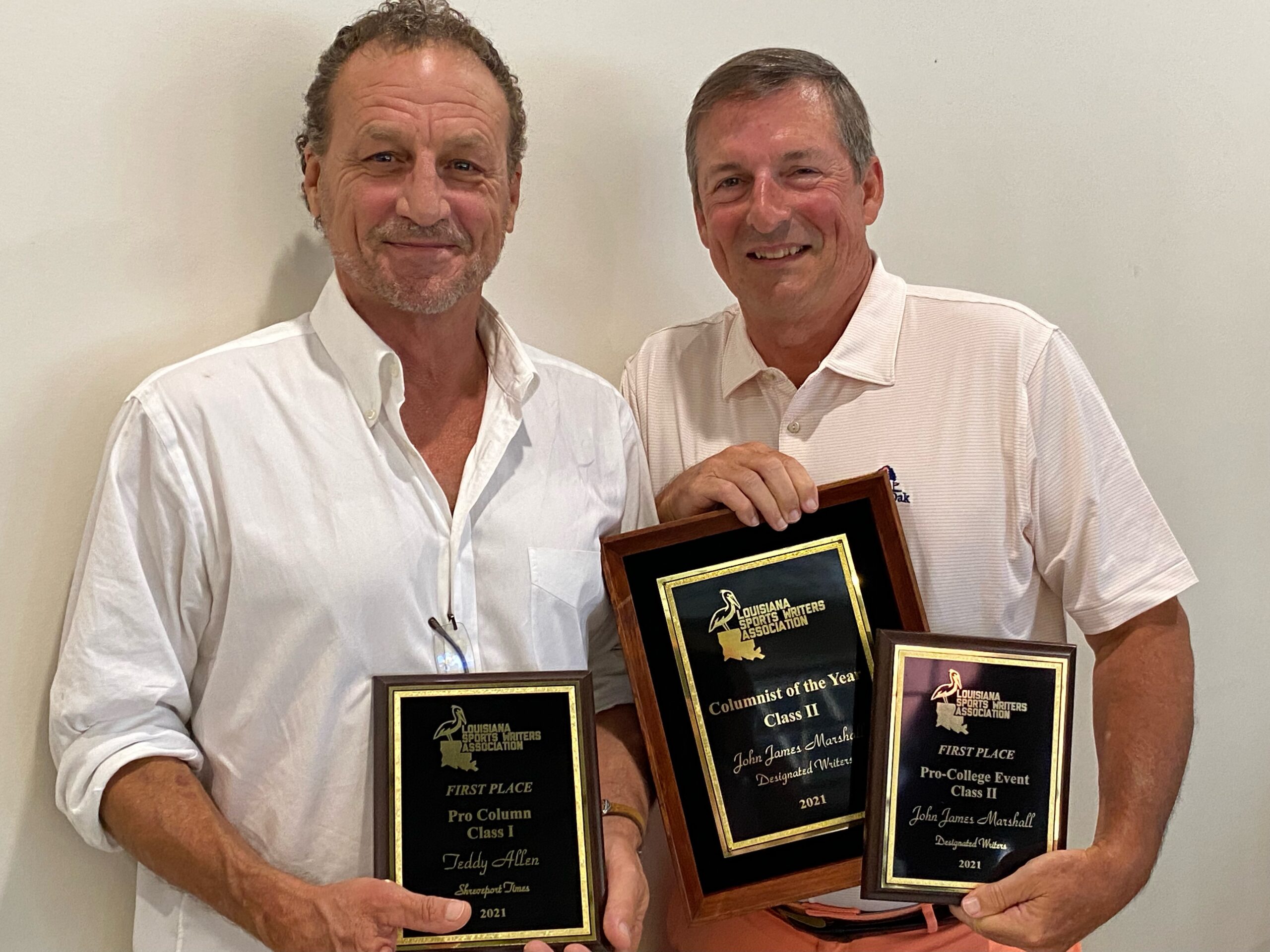 By the (award-winning) Designated Writers staff

The Louisiana Sports Writers Association held its annual awards contest on June 26 and the Designated Writers staff brought home plenty of hardware. No, we didn’t have to rent a U-Haul to bring it all back to the palatial DW offices, but suffice it to say, we got all up in there.

When it all started, co-founders Teddy Allen and John James Marshall pledged to bring award-winning writing to the DW readership and that’s exactly we did.

Little ol’ DesignatedWriters.com finished third — THIRD! — in the Newspaper Sweepstakes for Division II, which is even more interesting because we have never printed a word on a newspaper in our entire existence.

Teddy won First Place in the General Sports Feature category (Division II) for his story on the baseball gods letting Louisiana Tech play final 16 games of season in the new home park. The judges’s comment was “Exceptional piece capturing the scene and mood of a big event.”

Speaking of big events, JJ won First Place for his feature on the day when the Independence Bowl and the Tech/LSU basketball game were held on the same day. The story won in the category Pro-Column Event and was titled “One special (sports) day in Shreveport-Bossier. “A creative approach to covering a unique two-event day on the local sports scene. A fun read with writing flair. Nice work coloring outside the lines,” said the judge.

Also, JJ was named Columnist of the Year (Division II) for his pieces on Brian Kelly’s hiring at LSU, the re-birth of football at Centenary and the Tech baseball regional.

The two founders also placed third in Best Podcast, so there’s that.

Writing for a previous employer, Teddy also racked up another First Place for his column on the death of former New Orleans sports editor Bob Roesler, “The winning article was a heartfelt tribute to the author’s mentor in which they masterfully weaved a personal anecdote into a life lesson.”

Proving that the DW guys are multi-faceted, here are more awards that were scooped up:

** JJ and co-host Bonzai Ben Marshall won First Place for Best Radio Duo/Team. “This clip left me wanting to get the hosts takes on a bunch more stuff. I loved how fired up and passionate they were. It was also funny in spots, and finding that line between good, sincere analysis and fun is the line every host should try and toe. I think this show did it the best. Only thing missing was an interview portion.”

** Teddy and Chris Mycoskie won Third Place for Best Live TV Broadcast for their entry of the Tech-Texas Southern basketball game on ESPN+.