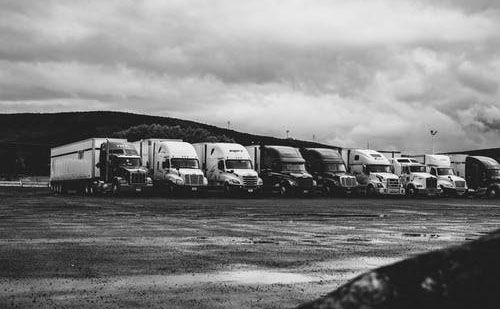 Looking at the World Through a Windshield

When legendary Country music radio disc jockey Larry Scott passed away in July 2016, I was too busy bragging about take-out pizza to take notice. I know this to be true because I looked up the date on my Facebook timeline, and this is what I posted that very day – a cellphone picture I had taken of a banner that hung in the window of a Mobil station in my hometown of Viera, FL. The banner touted: “Best Gas Station Pizza Ever.”

That’s merely an odd point of reference to a small space in time about something that ultimately hit me on a grand scale. When I discovered months after the fact that Larry Scott had died, I reflected for a moment on all the interstate miles I had put behind me over the years as a student at Louisiana Tech University, traveling Interstate 20 almost every weekend for four years between relatives’ homes in Shreveport and my college dorm room 60 miles away in Ruston. There were also interstates 30, 40, 55 and 57, when I would travel the 900-plus miles between college and my parent’s home in Mount Prospect, IL., during summer breaks. And then interstates 10 and 95, when I moved 1,000 miles in 2006 from Louisiana to a new home in Florida.

These were times in my life when the federal interstate system led me to independence, to new opportunities, to bigger responsibilities and, with each mile, always a better life.

No one glamorized the interstate more than Larry Scott. Every Sunday night at 11 p.m., on KWKH radio station in Shreveport, Larry Scott hosted a program called “The Interstate Road Show.” No doubt from its namesake it was radio fare geared toward truckers and other late-night interstate motorists. When I listened to the program, I often pictured in my head a tired and lowly driver and his diesel-chugging 18-wheeler headed deep into the dark of night with nothing more than a sea of broken white lines stretched out infinitely beyond the glare of his headlights.

The Interstate Road Show played through my headphones a mixture of Country music, news, weather reports and road condition updates. Then there was Larry Scott’s comforting deep voice – not an upbeat Casey Kasem American Top-40 hits type voice — but that of a road-weary passenger there to keep those road dogs and flatbed cowboys steady company and alert, like a warm cup of coffee.

For 14 years starting in August 1982, Larry Scott hosted the Interstate Road Show on KWKH radio, which was nationally known for launching the Louisiana Hayride live country music show in 1948.  I graduated college in 1984, lived in Natchitoches, La., for two years, and made Shreveport my official hometown in 1987. Late one stormy Sunday night, while searching on my Sony Walkman for a radio station that would give me weather updates while also lulling me to sleep, I discovered Larry Scott and merged onto his highway to musical Heaven. I soon developed a love for trucking songs like Del Reeve’s “Girl on the Billboard,” Red Sovine’s “Teddy Bear,” and “Phantom 309” and Merle Haggard’s “White Line Fever.” There was Eddie Rabbit’s “Driving My Life Away,” Kris Kristofferson’s “Me and Bobby McGee” and Alabama’s “Roll On (Eighteen Wheeler).” In a virtual dream state, I became part of CW MCCall’s “Convoy,” I rode along for Bobby Bare’s “500 Miles,” and “I’ve Been Everywhere” with Johnny Cash. In the many Sunday nights that followed, I found myself more and more enchanted by trucking songs and the lure of an old lonesome highway.

Put together any playlist you’d like of songs for a road trip, and they’ll get you from Point A to Point B, but nothing romanticizes a oneness with the road like the Interstate Road Show did for me.

The interstate transportation system, heralded as the greatest public works project in United States history, has touched virtually every life in America since the day President Dwight D. Eisenhower signed the Federal-Aid Highway Act of 1956.  I was born in 1959, and some of my earliest childhood memories are family trips on Interstate 20 from our home in Dallas to my grandmother’s house, and the houses of aunts and uncles, in Louisiana. Those trips were also highlighted by various stops in Texas towns like Tyler and Terrell, and at highway landmarks like the occasional Stuckey’s for drinks and snacks. I remember watching my sisters coax long-haul truckers to reach up, grab a strap, and pull down for a honk of their big rig’s horn.

Between road trips and trucking songs, I’ve always felt an acquaintance with the interstate system, and I guess it’s why I’ve always been intrigued by those who spend their lives there.

Few people have become as acquainted with the interstate system as Indiana native Scott Ross. Not quite 59 years old, Ross has been driving tractor-trailer rigs for nearly three decades and celebrated the one-million miles mark – a major milestone in trucking – in November 2018. And he keeps on trucking, as they say, driving his lightweight, fuel-efficient and aerodynamic Freightliner Cascadia across the Midwest and East Coast for days and weeks at a time.

I reached out to Ross, told him about my infatuation with truck stops, trucking, interstates and the Interstate Road Show. I wanted to hear it straight from a “Million-Mile Man,” I told him. Tell me, please, that it has been as alluring as Larry Scott and all my favorite trucking songs have made it out to be?

I said, “When you’re ‘On the Road Again,’ as Willie Nelson sings, where might one find you?  In other words, what’s your 20, good buddy?”

“I’m usually somewhere between Chicago, down to Atlanta, then over to the East Coast and up to Baltimore and the D.C. area, then all of New England, and all the states in between that,” Ross said. “Those are some of the toughest freight lanes in the country. I’d much rather run I-10 out to the West.”

I told him, “In his song ‘Truck Driver’s Blues,’ Merle Haggard sang the lines ‘Feelin’ tired and weary from my head down to my shoes.’ The interstate must take a heavy toll, right? And I’m not talking per axle at the toll booth, but on your body and your rig.”

“Any of the snowbelt states have absolutely terrible roads from salt and snow plows. Like Michigan, Indiana, Ohio, Illinois, Iowa, Pennsylvania, Wisconsin and Minnesota. You get the picture; all the way across the top of the country,” Ross said. “But the interstate system really is something. No other country our size or bigger can compare. We have connected everything. We could use some more interstates though.”

Ross, when he’s home, hangs his keys in Melbourne, FL. Despite my enthusiasm, he was describing trucking about as trivial and matter-of-factly as I would describe my government desk job. And I understood that for him it is a job, so I couldn’t blame him for a perceived lack of passion. Still, I tried to dig deeper.

CW McCall became famous for a song about trucking across the United States in an unstoppable convoy. “Have you got a CB handle? Can I get a 10-4 from you on that?” I said.

“That’s a big negatory, there Pig Pen,” but, Ross explained, CB radios are still very much a part of the trucking world.  “I, like most drivers, don’t use the CB radio to just chat someone up, but to stay informed and to inform others of road conditions and hazards.”

I caught myself yawning.

I said, “truck song legend Red Sovine, saluted truck drivers in his song, ‘Truck Driver’s Prayer.’ He said, ‘If everyone would drive like you guys do, there would be a lot less accidents and deaths on the highway.’” So, I asked Ross: “Did you know that I can’t see you in your sideview mirror if you’re driving too slow? Ponder that for a moment, if you would.”

Ross, momentarily at a loss for words, said, “I spend long periods of time on the road, and I never get bored. There are a lot of really bad drivers in both cars and rigs. While I’ve never had an accident, I’ve seen a lot of accidents. I’ve had my share of embarrassing moments. When I first started driving in ‘94 I blocked off a highway trying to flip a U-turn.  Most people think it would be hard to drive or scary to drive a tractor-trailer rig but it’s a piece of cake. Anybody could drive these trucks as long as they pay attention and possess a little common sense.”

“Have you ever heard a song by Leland Martin called, ‘Stone Cold Fingers,’ with these lyrics: ‘Sometimes I wonder as I look back and see that big ‘ol trailer in the mirror, was this kind of life worth losing all I left behind me through the years.’” I asked Ross, “Could they pry you away from your custom rig?”

“I guess the biggest pitfall is being away from home and family … ” Ross said.

I interrupted, “But what about the freedom of the open road, or even the lack thereof – of deadlines and meeting the unrealistic burdens of delivery schedules? You must have lived the trucker anxiety Eddie Rabbit’s sings with, ‘Ooh, I’m Driving my life away.’ The hours you guys and gals put in must be brutal.”

“Well, my clock is a 14-hour work day. I can use 11 of those hours to drive.  I can’t drive once the 14 is reached,” Ross said. “I’m only allowed 70 hours for eight days, and one day I might be driving in the morning and the next at night, you just never know. I prefer to drive at night though. This company gives one day off for every week out. I think most companies are about the same on home time policy.”

I was perplexed. I said, “Perhaps you’ve heard Jason Aldean’s song, ‘Asphalt Cowboys,’ which describes trucking as a ‘High-speed rodeo.’ What about you, buckaroo, Bucka-Ross? What made you choose a life in this rodeo?”

“I’d always driven some kind of truck since high school. I thought it would be the logical thing to do. I’ve been driving tractor trailers since the early 1990s. I drove with my first company, Burlington Motor Carriers, until 2000. Then I drove 11 years locally hauling sod with a flatbed trailer. The housing bubble brought an end to that as all our sod installations were for new homes,” Ross said. “My million miles with Werner don’t include all the safe and accident-free miles I driven with other companies.  Trucking companies only keep track of the miles a driver runs with them. So, it’s hard telling how many miles I actually have driven as the other companies I worked for are no longer in business.”

“As if you haven’t noticed,” I said, “One of my favorite subjects is trucking songs. Have you ever heard the Del Reeve’s song, “Watching the World Through a Windshield”?

“I hate to correct you,” Ross said, “but I believe it’s ‘Looking at the World Through a Windshield.’  So, the answer is yes, I remember hearing it as a kid.  My parents were big on the old Country music stuff.  Well, except it wasn’t too old then.”

“I don’t listen to trucking music,” he said, “not unless it’s accidental.”

Ross laughed, but I sat there incredulous. It was like Superman was telling me he’d rather wear boxers than “tighty” reds.

“I’m serious,” I said. “I would like to know what’s playing on the radio right now in your truck?”