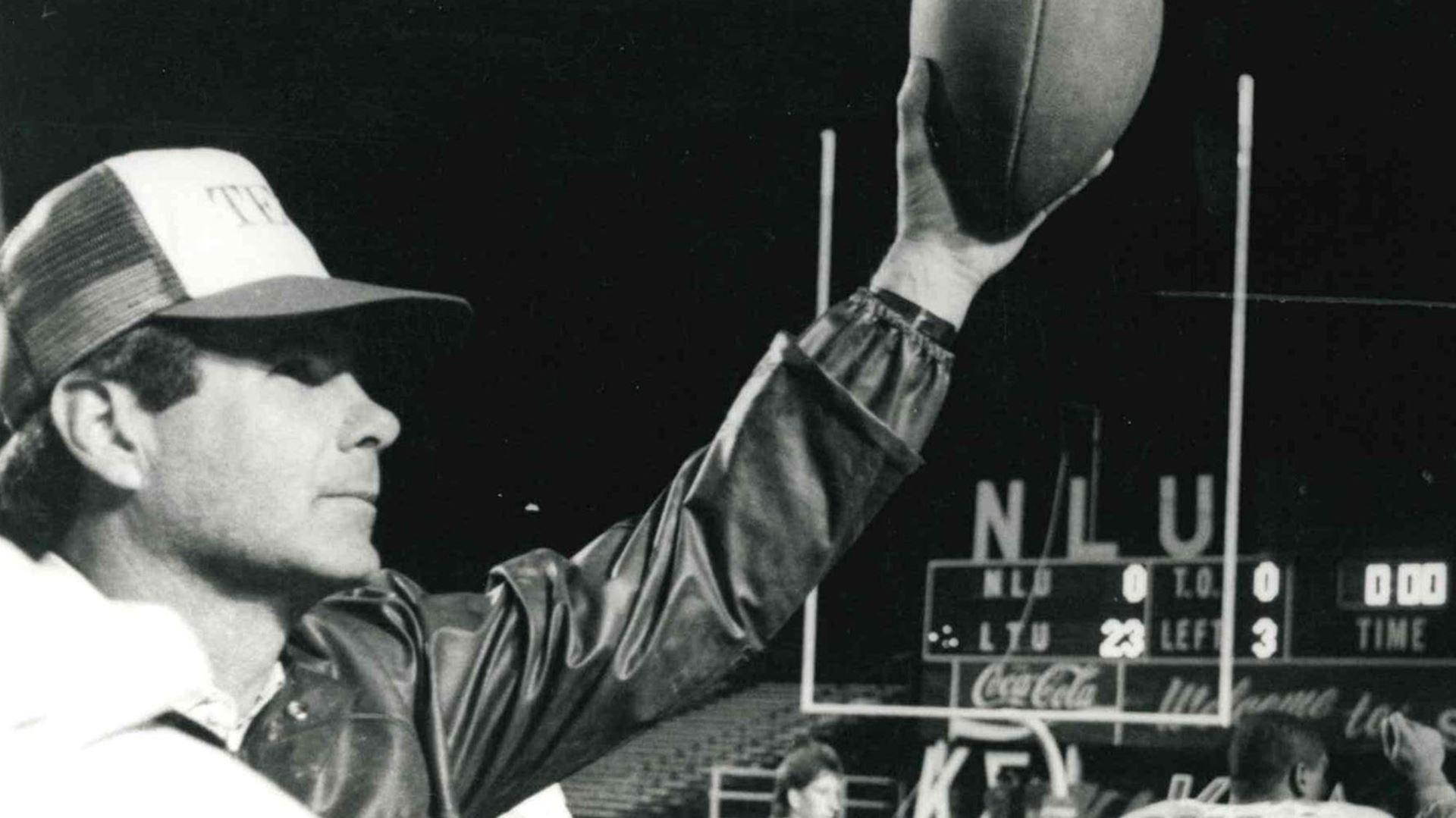 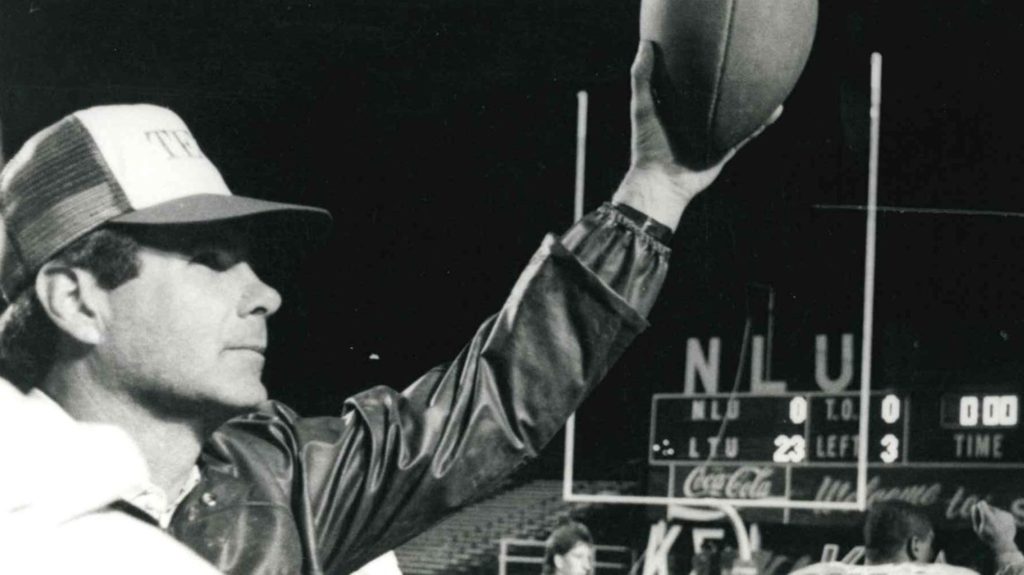 When Joe Raymond Peace received the call this spring informing him he was going into the Louisiana Tech Athletics Hall of Fame, it was, he said, “totally unexpected.” The former head football coach, who led the Bulldogs into Division I in 1988, didn’t really know what to think.

After processing the information, he thought about all the players he coached — especially the ones he coached from 1988 until 1995.

“This is award is for them,” Peace said. “I thought it was great that we are going to get the recognition for what we did and what we accomplished.”

Peace’s second thought was how humbling it was to enter a Hall of Fame which includes  so many Tech icons. Names like Joe Aillet, Maxie Lambright, Mickey Slaughter, and Bob Brunet, all of whom played a role in his development as a player, coach, and as a man.

“I don’t think I had much say in the matter,” Peace said of his recruitment. “Both of my parents were Joe Aillet people. They loved Coach Aillet and they loved Louisiana Tech.”

Peace’s father had played for Aillet at both Haynesville High School and Louisiana Tech. And the Peace Family would often travel from Sicily Island to watch the Bulldogs play.

Once at Tech, Peace played linebacker for Aillet and Lambright. He learned from both and both had a tremendous influence on him as a player headed for a career in coaching.

“Coach Aillet was a man ahead of his time,” Peace said. “He was a lot like my dad in the fact that he was a technician, and you would run it until you got it right. He could handle any problem. Any situation. Coach Lambrignt was a tough son of a gun. I didn’t realize why he was so tough until years later when I got into coaching.”

However, it was a coach who was in Ruston for only one year who probably had the biggest impact on his coaching style — former Dallas Cowboy head coach Jimmy Johnson.

“He was the most enthusiastic and passionate coach I had ever been around,” Peace said. “He did such a tremendous job teaching the little things.”

Peace, who was a team captain in 1967 — Lambright’s first year — credits Johnson for helping him make All-Conference as a sophomore in 1965.

It was also during his sophomore year when Peace returned to Sicily Island to help his father coach during spring practice.

“That’s when I found my passion,” Peace said.

After a brief period with the Houston Oilers, Peace, with Aillet’s help, found a way to pursue his passion. He joined A.L. Williams’ staff at Woodlawn High School as an offensive line coach and went with Williams to Northwestern State in 1975.

Peace had better luck with his first college recruit than McClendon had with him.

He met the recruit in the parking lot at St. Mary’s High School, where his wife Carolyn had finished up interviewing for a teaching job. Peace’s Jeep — coincidentally enough, a Scout — wouldn’t start. It just so happened that Pete Perot was in the parking lot, leaving after a late summer workout.

Perot pushed Peace’s Jeep to get it started. The following year, Perot would be pushing around Southland Conference defensive linemen for Peace, who was a father figure for the lineman; Perot had lost his own father a few years prior.

“He was the reason I went to Northwestern,” Perot, who graduated and went on to play with the Philadelphia Eagles, said. “I always felt like he was honest and up front, fair, and he took an interest, not just in me, but in all of us.”

Another Demon Peace took a special interest in during his time in Natchitoches was Bill Johnson, today the defensive line coach for the LSU Tigers.

When Johnson finished his eligibility, Peace asked him about his plans and what he would do.

A few years later, Peace had the opportunity to call Jimmy Johnson — then head coach at the University of Miami — and recommend Bill Johnson. The soon-to-be NFL Hall of Fame coach listened to his former linebacker.

In 1983 when A.L. Williams went from head coach at Northwestern State to the same position at Louisiana Tech, Peace followed, coaching the offensive line for Williams, his mentor.

“A.L. gave me my first opportunity in coaching at Woodlawn High School,” Peace said. “I am very appreciative that he believed in me and allowed me to follow him into the college ranks.”

After a disastrous 1987 season with Carl Torbush at the helm, the powers that be hired a “Tech guy” when Torbush, as Perot put it, “left in the middle of the night.” They turned to Peace to lead the Bulldogs from Division I-AA to Division I.

To say the move to Division I was criticized would be an understatement.

Two of the first calls Tech’s new head coach made were to Perot and Johnson.

Neither hesitated when they got the call. It was part of the “Peace Treaty,” an agreement between coaching friends who loved football, spending time in the outdoors, and each other.

“Those first three years with Joe Raymond,” Perot said, “were the most fun we ever had in coaching. We learned so much from him and learned from each other.”

Once Peace had his staff in place, which included current LSU offensive coordinator Steve Ensminger and Larry Anderson, Peace laid out a five-year plan for the program. While there were lofty goals, the plan also accounted for addressing immediate needs. Winning the recruiting battles over in state schools was Job Number One.

“He had an understanding of what kind of players he needed to get to separate Tech some of the other schools,” Perot said.

Peace’s mother, Sue, got wind of her son’s five-year plan. She also got wind of rumors about the future of the program. Being one to tell like it was, Sue Peace made a suggestion to her son.

“She told me I better change my five-year plan to a three-year plan,” Peace said with a laugh. “So I did.”

Regardless, Peace knew what he had to do first.

“It was quite obvious that the first thing we had to do was stabilize our recruiting and get back on the track of success,” Peace said. “We lost some players to Northeast and they won a national championship with those players. I told our players from the very beginning, we couldn’t afford to lose to Northeast, McNeese State, Nichols, USL— not when we were making the move to Division I and saying we were on another level.”

“It was a monumental game for us,” Peace said. “Especially in terms of recruiting. It marked the beginning of a shift.”

Happily for Tech fans, it marked the end of an era losing to their bitter rival down I-20. Under Peace, the Bulldogs would beat NLU the next three seasons — and not give up more than 10 points or score fewer than 24 in each those contests.

Of course those outcomes against the Indians didn’t just happen by chance; the Master Motivator had his charges believing that spies were on top of J.C. Love Field and the Thomas Assembly Center with binoculars. For good measure, Peace moved practice to different locations in Ruston. Tuesday’s practice would be held at Cedar Creek. Wednesday might be at Ruston Junior High.

“He had a way with words that could make your body do what your mind didn’t think was possible,” Perot said.

By the time the 1990 season rolled around, Peace had the Bulldogs believing they could beat anybody anywhere. This magical regular season ended with the Bulldogs winning seven of the last eight — the only blemish a 16-14 loss at SEC power Auburn.

The final regular season game, which had bowl implications for both teams, was the stuff of Tech legend.

Colorado State, led by Ohio State coaching legend Earl Bruce and a young offensive coordinator by the name of Urban Meyer, held a 30-14 advantage with a little over 20 minutes to go in the game, but Peace had guys on his sideline named Jason Davis, Michael Richardson, Gene Johnson, and Bobby Slaughter, so the Rams’ lead didn’t mean a whole lot.

Johnson found a wide open Slaughter in the closing minutes in the south end zone. The defense held to give the Bulldogs a 31-30 win over CSU, and most of the 15,000 Tech fans in attendance flooded the field and tore down the south goalpost in the postgame celebration.

“That game was so special,” Peace said. “To go to Tech’s first bowl game since 1978. To play a good Maryland team to a tie in Shreveport in front of our fans. It was the largest attendance in Independence Bowl history. We helped to save the bowl.”

For his efforts in 1990, Peace was named the Louisiana Sports Writers Association Coach of the Year.

Perot said Peace was one of the best recruiters in the state of Louisiana. The evidence is there to support the claim. In 1993, a Tech-record four Louisiana Tech Bulldogs (Will Roaf, Myron Baker, Artie Smith, and Doug Evans) were selected in the NFL Draft.

Roaf, a McDonald’s All-American in basketball coming out of Pine Bluff High School, went on to become an NFL Hall of Fame tackle after playing for both New Orleans and Kansas City after his career at Tech.

“Going to Louisiana Tech was one of the best decisions I ever made,” Roaf said. “Playing in the pro-style offense and for the coaching staff that Coach Peace assembled, it truly helped me become the best player I could be. But it wasn’t just on the field, Coach Peace was a father-figure to me and my teammates off the field, as well.”

Recruiting wasn’t the only area where Peace enjoyed unprecedented success.

In the four seasons of 1989 to 1992, his Bulldogs never lost a home game; that 16-0 accomplishment that has never been equaled in Louisiana Tech history. To put it into perspective, in the 24 football seasons since Coach Peace left Louisiana Tech, the program has had five coaches.Those five coaches combined have had three seasons in which the Bulldogs have been undefeated at home.

Some of Peace’s players found success at home, as well.

Matt Massey, who was born and raised in West Texas, came to Ruston in 1993 as a defensive back out of Cisco Junior College. Massey fell in love with the Ruston area and has never left.

“Many of Joe Raymond’s players were with him for four or five years,” said Massey, today a successful businessman. “I only played for him two years, but I feel lucky in the sense that, living in Ruston, I’ve had the opportunity to get to know him as a friend and family man. I’ve called him for advice on business deals. He has been like a father to me.”

A father figure to his players. A fierce, tough competitor to anyone who played or coached against him. Master Motivator. A true player’s coach. All of these have been used to describe the man who led Tech into Division I. And now, Joe Raymond Peace, Louisiana Tech Hall of Famer, is added to the list.