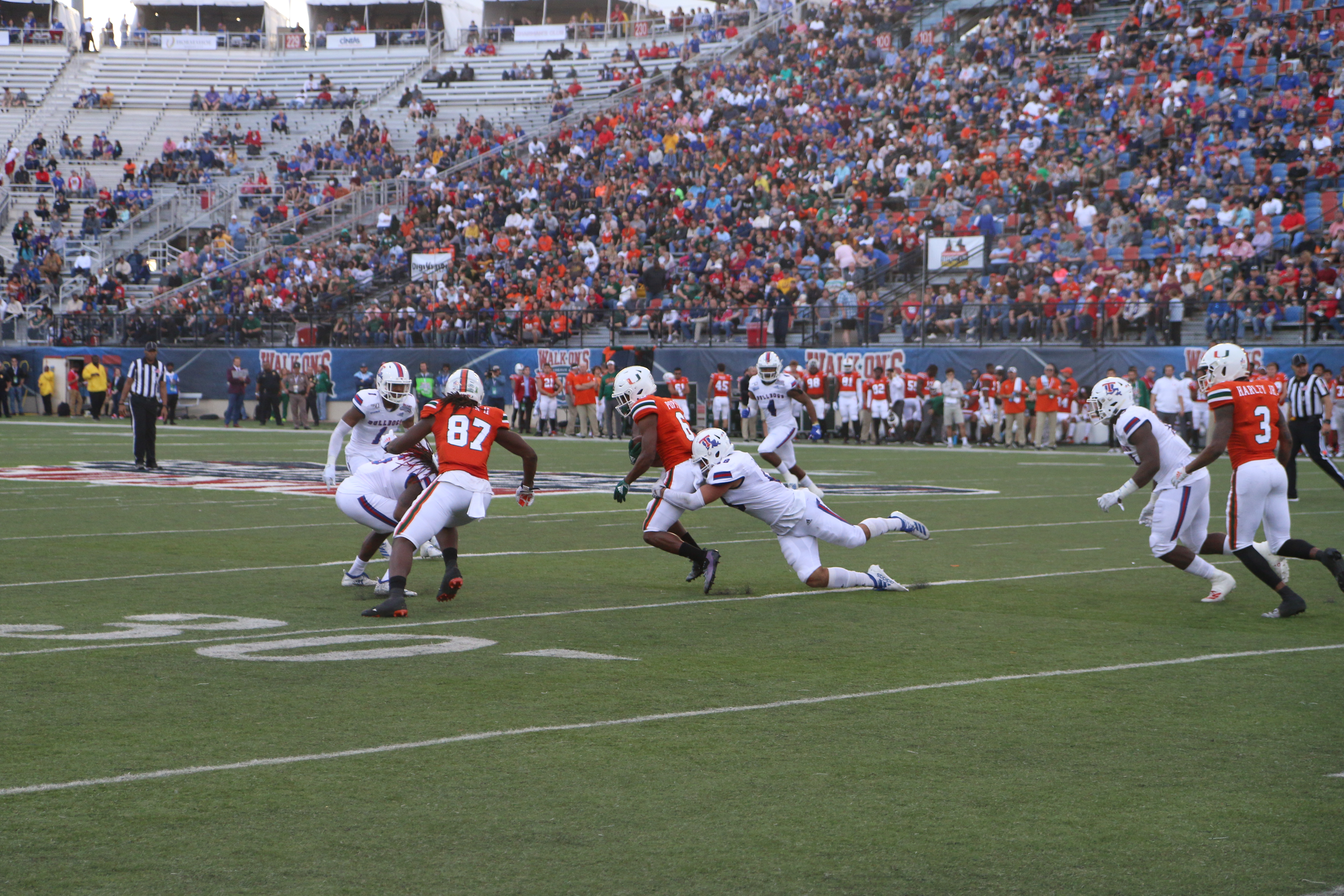 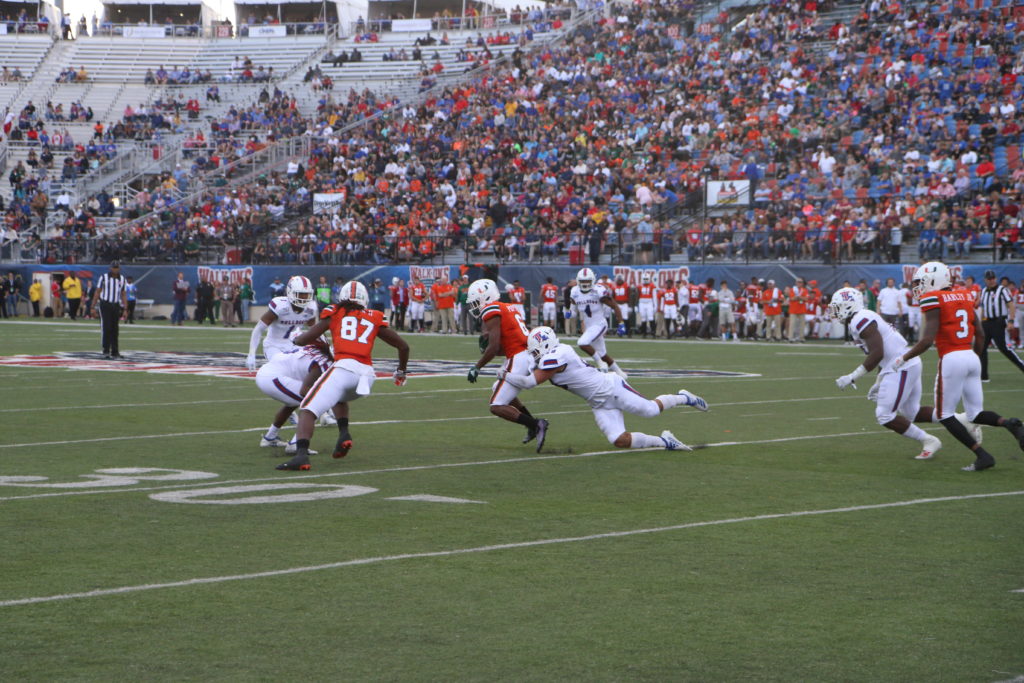 There they were in the post-game interview room after Wednesday’s 14-0 win by Louisiana Tech over Miami in the Walk-On’s Independence Bowl. Neither one was a starter when the season began; in fact, one wasn’t even a starter in this game.

Both had decisions to make about their future before the 2019 and both decided to stick it out. Because you never know.

You never know when you’ll be the third-string running back when the season starts and then end up as a 1,000-yard rusher. Ask Justin Henderson.

You never know when you’ve already got your degree and could go anywhere else in search of a starting position but decide to stay as a backup cornerback and come up with a crucial interception in the final game of your career. Right, Aaron Roberson?

“Both these young men had an opportunity to leave,” Tech coach Skip Holtz said. “People look at the depth chart and think they have to transfer. These are great success stories.”

Actually, they may be even more than that. For Roberson, who played many of his high school games at Independence Stadium when he was a Huntington High Raider, it wasn’t just another game. “It’s an emotional moment,” Roberson said. “I cried a little bit on the field but I had to wipe those tears and keep going.”

For Henderson, a native of Florida, it was a chance to defeat a team from his home state. “I’m going to do some serious bragging when I get home,” said Henderson, who rushed for 95 yards in the game.

This may not go down as the most thrilling Independence Bowl of all time, but you’d have a hard time selling that to the Tech faithful, who made up a majority of the 33,129 in attendance. To shut out a Power 5 opponent – and force them into playing musical quarterbacks in order to try to find anything resembling a spark – was quite evident as the Bulldogs rushed the field after win #10 (the first double-digit win total since becoming Division 1).

“I can’t put into words my feelings and emotions on what these players have accomplished,” Holtz said. “I didn’t make a block or a tackle or score a touchdown or throw a pass. But I got a front-row seat watching a group of guys that just rolled up their sleeves and competed their tails off.”

On the other sideline, it was a nightmare scenario. The Hurricanes knew that a loss to a Group of 5 school (Tech is a member of Conference USA) wouldn’t exactly bring back memories of the glory days of The U.

Miami (6-7) had very little to gain from this game – and the Hurricanes played like it. “It’s very disappointing,” said receiver K.J. Osborn. “It’s not the Miami standard.”

For a while, it looked as though the only excitement might be from the race to see who could break the Independence Bowl punting record. In the end, both punters did. Miami’s Lou Hedley and Tech’s Brady Farlow both tied a 43-year-old record with nine punts each.

Which should tell you something about how exciting the first half was (or wasn’t). If that doesn’t, this will: During a third-quarter timeout, the fans who were still awake dusted off that relic from the 1990s – the wave – in order to make it feel less like a library and more like a football game.

The first score came in the second quarter when Tech’s backup running back Israel Tucker got loose out of the backfield as quarterback J’Mar Smith was scrambling to avoid a sack and basically just shoved the ball in Tucker’s direction. The closest player to Tucker was tight end Bobby Holly, who didn’t even have to throw a block as Tucker completed a 26-yard scoring play. It was the business end of a 13-play, 91-yard drive in which the Bulldogs converted three third downs on the drive.

There you go. That’s your first half highlight package (minus, of course, the punting).

It was quite a bit different from 2003, the last time these two teams played on this field, when Miami put a 48-spot on the Bulldogs. It didn’t take long to realize that Devin Hester, Frank Gore and Brock Berlin weren’t walking through the Independence Bowl door. (Well, that’s not exactly correct. Berlin did walk through the door, since he served as Honorary Captain for the Hurricanes.)

Miami even resorted to using Tate Martell for a series at quarterback. That’s the same Martell who (1) transferred to Miami from Ohio State in a high profile move (2) was moved to wide receiver during the season (3) missed multiple games due to personal reasons. After one series that picked up seven total yards, Miami coach Manny Diaz had personal reasons to transfer Martell back to the sideline.

After Roberson’s late interception – off N’Kosi Perry, the third Miami quarterback used in the game — Smith got loose for a 26-yard run and scored on an 8-yard run on the next play to make it 14-0 and keep this from being the lowest scoring Independence Bowl in history (there were 12 points scored in 1983).

The closest Miami came to the goal line was the Tech 38 – and that was on the second-to-last play of the game.