One special day in Shreveport (and Bossier) 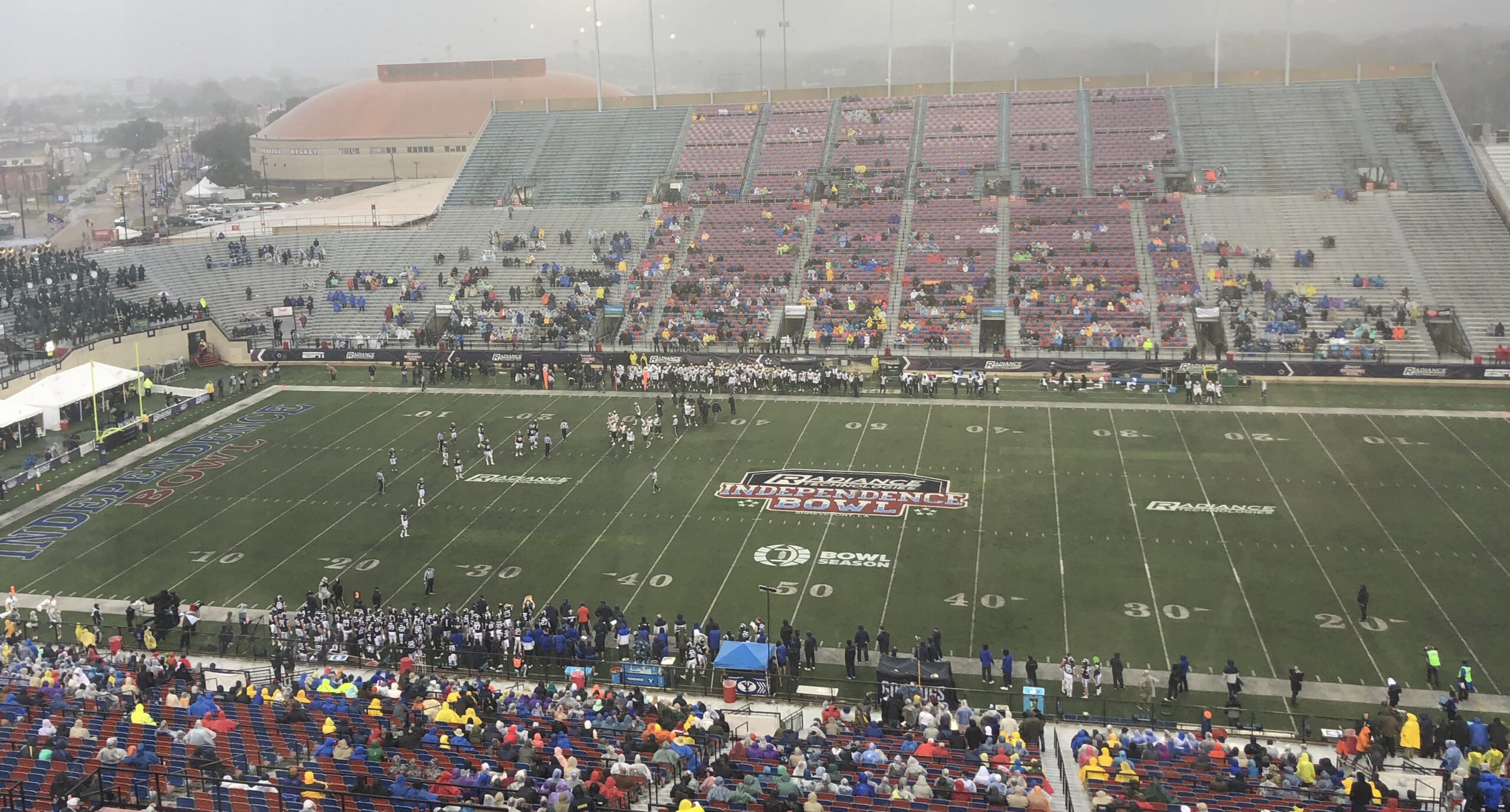 You can say what you want about the state of sports in Shreveport-Bossier City, but days like Saturday don’t come along too often. Major college events were held on both sides of the Red River and both involved a team ranked in the Top 20 of their respective sports.

Save yourself the trouble of looking it up and just assume it hasn’t happened too often. Or go with “never” and dare someone to call you on it.

One game featured two teams that came from a combined 1,838 miles away and in the the other, the two came from only 309 total miles away.

Interestingly, one game started almost exactly when the other one ended.

One was a post-season football bowl game, the other was a non-conference basketball game. Both games were nationally televised. Both were highly competitive and well played.

There was a former national champion playing a school that didn’t even have a team five years ago.

And there was a flagship university of the state against a school that likes to think it is the home team of North Louisiana, playing in a location that is often the intersection of divided loyalties.

This was something special, all right. The only thing more special was being able to see them both.

These days, you just assume the weather is going to be awful for the Independence Bowl. It’s almost a tradition by now. To be honest, the Snow Bowl of 2000 (Mississippi State vs. Texas A&M) wouldn’t even make the Top 5 for most miserable conditions in the 45 years of this game.

That Top 5 is going to have to be re-organized after Saturday.

Of course, it didn’t have to be this way. For the three days leading up to the game, the temperatures reached 80 degrees. But a few thousand residents of area code 318 took one look at their weather app mid-week and saw what tradition already knew – rain, cold and wind on Saturday. If you didn’t know that was the date of the Independence Bowl before then, you did now.

Shreveport stayed home. Which meant that the vast majority of those who showed up were fans of Brigham Young and UAB.

If there’s a theme that rings true every year, it’s that the Independence Bowl is improperly named. Nice idea in 1976 with the whole Bicentennial thing going on, but it has long been established that “hospitality” is the key concept at work here.

Once again – as seems to happen every year – both coaches brought it up (relatively unprompted) in the post-game media conference. Winning coach Bill Clark of UAB went on and on about how he and his team were treated that he might as well been writing a referral letter. “It was just as good as it could be,” he said and then made sure he thanked the police escorts.

So was the game, at least for his team. UAB came in at 8-4 and was a touchdown underdog but never flinched. The Blazers got out to a 14-0 lead in the first quarter and it was game on with the 13th-ranked Cougars. Even after BYU took a 28-24 lead early in the fourth quarter, UAB went on a 15-play, 75-yard drive for a score. Faced with fourth-and-7 from the BYU 14, Clark told his kicker to take a seat and went for it.

It look like he also told the BYU defender the same thing as UAB quarterback Dylan Hopkins found Trea Shropshire for an amazingly uncontested touchdown pass to give the Blazers what would prove to be the winning points.

It should be pointed out that UAB iced the game late in the fourth quarter when the Blazers “recovered” a “fumble” after a “completed pass.” Nobody needed to turn out the lights in the replay booth because apparently, they were already out.

Maybe those guys were also in a hurry to get across the Red River.

If you walked into Brookshire Grocery Arena (aka “The Sack”) at any point after the LSU-Louisiana Tech basketball game had settled in, you couldn’t help but wonder one thing – why can’t this happen more often?

Maybe not LSU vs. Tech – though that would be nice and it seems like those two programs have a very healthy relationship with each other – but why not Tech vs. another major program or LSU driving up to play a decent non-conference game? It’s college basketball, so scheduling can take place with about two phone calls.

LSU came in with a 10-0 record and a No. 19 ranking while Tech was 8-2 and its only two losses coming to members of the SEC and ACC. Unlike what took place at Independence Stadium, this was a game with high local fan interest.

Tech was the home team – the Bulldogs had the cheerleaders and the white uniforms – but the crowd slightly favored the Tigers. However what was interesting was that the crowd was mostly cross sections of Tech and LSU fans. There was as much blue and red in Section 109 as there was purple and gold.

If you wanted to watch a really good December college basketball game, this one did not disappoint. There were five lead changes in the second half and the game was tied seven times. The Bulldogs dominated the first half, scoring the first 11 points of the game, and led by eight at halftime. But it was a matter of time before LSU’s pressure and height began to take its toll on Tech.

“Our pressure has a cumulative effect on you,” said LSU coach Will Wade. “It may not get you early, but we do tend to wear you down. We got to their legs a little bit in the second half.”

Tech was beginning to struggle to score when Kenneth Lofton, Jr. had to come out with four fouls. After that, the Bulldogs really struggled and seemed lost as to what to do to try to score. They shot just 25.9 percent in the second half and scored only two points in the final 7:30 of the game.

Meanwhile, LSU sophomore Tari Eason scored 10 straight points and was the best player on the floor, finishing with 21 points and eight rebounds. When Eason was in the game, LSU outscored Tech by 21 points.

Tech led for almost 29 minutes of the 40-minute game. “I was proud of our guys,” Wade said. “We’re never out of it. It takes us awhile to get our footing.”

“I think (the atmosphere) was fantastic,” Konkol said. “It gives people something to watch that is of interest to them. Unfortunately, we just fell a little bit short.”

“I thought the environment was tremendous,” Wade said. “Tech had a great crowd, we had a great crowd. I didn’t know what to expect from the arena but I was very surprised in a good way. I thought it was a great night.”