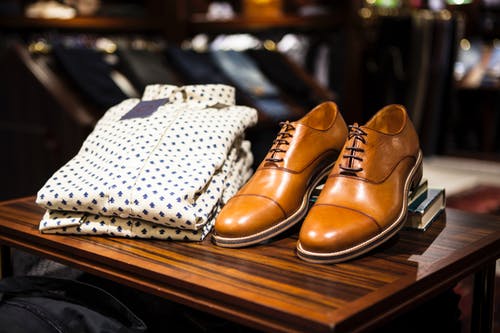 (This is from our Florida-based, Chicago-raised, Louisiana Tech-educated contributor Don Walker who, considering his last name, appropriately shares today about shoes…)

The ‘Sole’ That Sees Beauty May Sometimes Walk Alone

Every year, twice a year, I purchase two pairs of dress shoes. And because I’m 59 going on 75, and I’m like an old man set in my silly ways, I buy the same brand of black and brown Dockers’ Gordon Cap-toe Oxfords. They are  dandy and everything you would want in a shoe, meaning they don’t tear at the heel of the foot on the first and second wearing; they don’t pinch the little toe; and they keep their shape until I open the next box of Gordon Cap-toe Oxfords, usually six months later. One can find a pair on sale at Macy’s or Kohl’s, and they’re usually around $55. I purchase mine online because I decided several years ago there is no reason to go where other shoes are sold right there alongside them because I know exactly what I want: Size 10 medium Docker’s Gordon Cap-toe Oxfords. If there was a fan club for Docker’s Gordon Cap-toe Oxfords I would certainly belong to it.

I stood there at 6 a.m. with the closet door open, my chin pressed to my chest as my eyes scanned over the shoe rack. I was suddenly struck by the backlash of a noble deed. Not only had I donated my Gordon Cap-toe Oxfords to Goodwill, but I had unintentionally donated my prescribed Powerstep orthopedic insoles right along with them.  My plantar fasciitis needs those insoles for additional comfort. And, darn it all, I had visited the doctor’s office again just recently to purchase two additional sets of insoles at $45 each for those shoes I just donated!

Fast forward to 9 a.m. and I’m clogging around my office. I was determined by now that at the day’s earliest convenience I would head straight to the podiatrist’s office and purchase two new pair of insoles, owning up to my mistake by paying the full price and, essentially, turning my new $55 Dockers Godon Cap-toe Oxfords into $100 shoes. But wait!

What if I were to go to Goodwill and find my shoes on the sales floor, purchase them for $2 or so and retrieving my insoles? I would save myself as much as $75! At lunchtime I headed straight to Goodwill in search of Dockers Gordon Cap-toe Oxfords with Powerstep insoles. As I pulled in to the Goodwill parking lot from U.S. 1, I could see the “Drop-Off” area on the side of the building and there were countless bins both on the ground and on a loading dock that were overflowing with donated items. Tax time looms. Still, I remained optimistic I would find my shoes somewhere inside the store, but that was not to be. I left shoeless, but for the new shoes on my flat, achy feet.  I was told they would have one of their employees do a bin dive later in the day to see if they could be found, but I have little hope when the only description I could provide them is to show them the very shoes I was wearing and, with a nod of resignation, tell them they’d be recognizable by the blue Powerstep insoles.

“Umm,” I said. “They were Dockers Gordon Cap-toe Oxfords.”