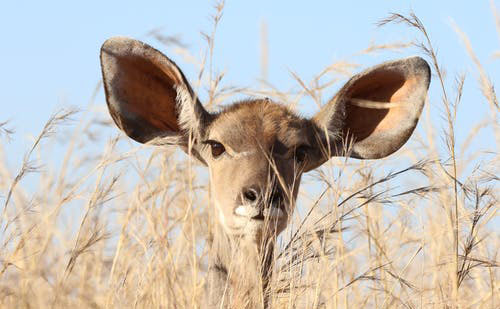 ‘HEAR ME OUT,’ From Designated Contributor Don Walker

As I’ve gotten older I’ve discovered this on-going coincidence: That with every room I walk into in which there’s a dishwasher running, a fan blowing, a washing machine rumbling or a radio playing, at that very same instance my wife is in an adjoining room saying something of major importance that I fail to hear.

The dog barks at exactly the same time she recites the Gettysburg Address. Is it my fault, then, that I have to ask her to repeat herself so I’ll know whether she said “four score” or “five score”? Because I’ll certainly need to know that when, two months from now, she says to me in front of the kids, “No, I said ‘Four Score!’ but you never listen to me.”

It’s not that I’m not listening, dear. I’m just not hearing.

I’ve spent a lifetime not hearing. “What?” and “Huh?” are the staples of my vocabulary. As a child I suffered repeatedly with ear aches. In grade school I was sent to speech therapy and from there it was recommended that my parents have my hearing tested. Then I was sent to a specialist and my poor ears were probed with what seemed like torturous medical instruments on numerous occasions. Eventually, the doctor recommended ear tubes. While they did put a stop to my ear aches, whatever modern miracle ear tubes may have served from a hearing standpoint was surely negated over time due to my love of music, beer bars featuring live bands, concerts, Sony Walkman and Apple ear pods.

At 61, I still have vivid memories of my childhood and remember times my brother and his friends would sit around the living room poking fun at me, all mouthing words but staying silent – pretending to be having a full conversation that I was unable to hear. These days, while I may have occasion to mishear one person in the room, whenever there’s two or more people or, worse, a room of people talking amongst themselves, I fail to hear anything at all beyond the buzz of chatter in the air.

During high school, I tagged along with some friends to go to a sandwich place for lunch. On the way there I noticed my friend had what appeared to be a CB radio in his car. “What’s this,” I asked him, picking up the receiver and automatically holding it to my mouth. “It’s a PA system,” he said. “My father uses it for work. If you talk into it people outside can hear you.”

We were sitting at a red light. I clicked on the receiver and as I spoke into it I could hear my voice amplified outside the car. We all laughed as other motorists around us looked out their windows to see where the voice was coming from. I recall a red Ford Granada next to us, and two guys with white shirts and ties looking in our direction. “Attention!” I said into the receiver, “This is a tornado warning. Severe weather is moving into our area. Please take safety measures immediately.” Again we all laughed, and I again noticed the two white-shirted guys in the red Ford Granada looking our way. When the light changed we drove another block before my friend suddenly turned right, down a side street instead of continuing on toward the restaurant. “Those guys in the white shirts are cops,” my friend said. “They’re pulling us over.”

I looked into a sideview mirror outside the passenger window. It was the white-shirted guys in the red Ford Granada. There was a flashing light now positioned on its hood. We pulled to the curb and stopped, and my friend promptly rolled down his window.

One of the white-shirted men was at the window almost immediately. “Do you know why I pulled you over?” he said to my friend.

None of us knew why we had been pulled over, but I was listening intently. Our friends in the back were frozen in their seats.

Turns out there’s a law against announcing public emergencies – like yelling “Fire!” in a movie theater – when there’s no actual emergency. And that includes announcing a tornado warning on a perfectly clear day in Chicago. There was also this: The white-shirted guys in the red Ford Granada? They were agents of the FBI.

I was certainly surprised, but even more surprised when I glanced to the right to see the other white-shirted FBI agent standing at my window looking none too happy. I sheepishly rolled down my window.

“Didn’t you hear me knocking on the window?” he said in a deep stern voice.

I had not, I told him. He then held up a walkie-talkie in his right hand and demonstrated he had not just been tapping on my window, but had used the walkie-talkie to rap on the window. He sensed my lack of attention was a sign of an attitude problem, not a sign of a possible hearing impairment. I had to do some fast talking, but thankfully convinced him that I was so focused on trying to hear what infraction my friend had committed that I had tuned everything else out. Turned out I was the actual scofflaw. We were eventually let go with a warning and a brief lecture on how not to be stupid high school kids.

Over the years my wife and I have debated whether I have a hearing problem or a listening problem, whether I hear only what I want to hear, or whether I’m just too busy talking about myself to listen to what others have to say. I’ve considered on numerous occasions that I should begin writing down things she says, versus things I thought she said. It can be quite amusing at times. She’ll say something like, “The kids are coming for dinner. I told them 5 o’clock.” But what I hear her say is, “The kids are coming for dinner. I told them why a duck?”