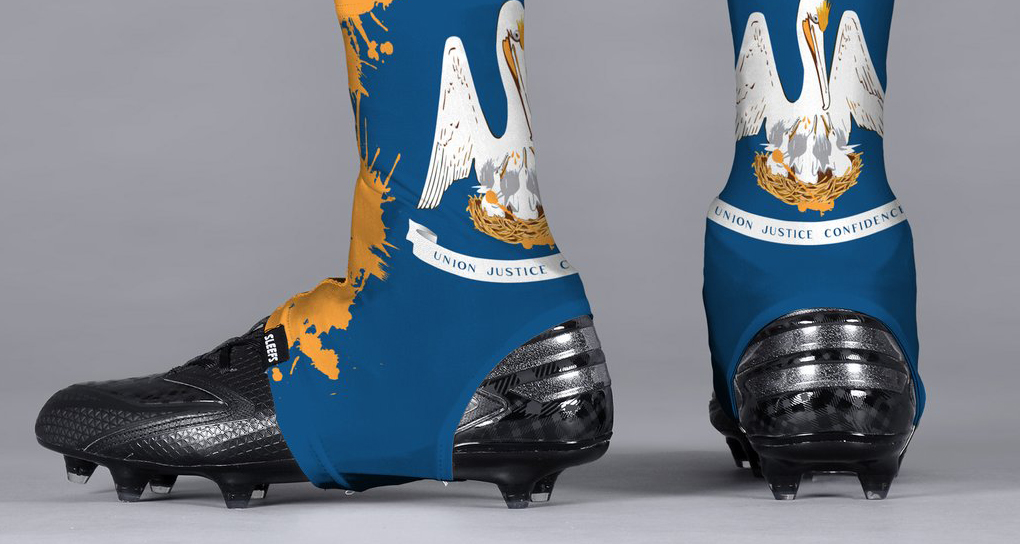 The Louisiana All-Time, All-Pro Football Team, According To Us (aka Giving Mississippi The Boot)

It started last week when Mississippi Sports Hall of Fame writer and good guy — we call him The Governor and we’re still looking for somebody in Mississippi he doesn’t know — printed his All-Mississippi Team in Mississippi Today, where he works as a columnist.

The rules: must be born in Mississippi and have played high school ball there. So a guy like Ray Guy, a star at Southern Miss but an import from Swainsboro, GA, doesn’t make it.

It’s still a pretty solid team, as you’d expect from our neighbors to the east. Boys can play football.

WR: Jerry Rice (Crawford), Lance Alworth (Brookhaven, and we always thought he was from Arkansas)

PK: Steve Gostkowski (played at Madison High BUT we think he was born in Baton Rouge. We’d love to allow The Governor to keep Gostkowski if he’ll let us use Willie Brown, who is from Yazoo City but played college at Grambling.)

“But keep in mind,” Rick wrote, “with our offense, who really needs a punter?”

He’s got a point. Heckuva team.

And that’s true. If you play, say, Idaho. Maybe even Georgia, Alabama, even Texas.

But hold up a second. Let’s trot a Louisiana team out, you know, just for fun, just to see if we can gather up enough ballplayers to at least make a showing.

Some, like Willie Brown, had the misfortune of not being born in Louisiana or they would make the team easily. The poster boy here is Dr. Billy Cannon (Philadelphia, MS). Jackie Smith (Columbia, MS) and Leo Sanford (Dallas) are two more studs who got to Louisiana as quickly as they could. And Willie Roaf, the pride of Pine Bluff, AR.

QB: To start with on our All-Boot Football Team, we told Rick he could pick the QB — Bert Jones (Ruston), Terry Bradshaw (Shreveport), Doug Williams (Zachary), or Peyton and Eli Manning (New Orleans). Go. (Note, we have three quarterbacks who STARTED A SUPER BOWL that we didn’t even bother listing!)

WR: NFL Hall of Famer Charlie Joiner (Many) and Reggie Wayne (New Orleans), 10th in NFL history in both yards receiving and passes caught.  Frank Lewis (Houma) won two Super Bowls with the Steelers before becoming a stud in Buffalo. Dub Jones (Arcadia), who won three NFL titles with Cleveland and was a 2X Pro Bowler, could also take some snaps at halfback if needed and help coach; he was sharp enough to coach Jim Brown and convince him to catch some passes so . . .

SLOT: Louisiana Sports Hall of Famer Brandon Stokley, who played at ULL and went into the LASHOF along with Wayne in 2018, would be perfect here — had he not been born in Blacksburg, VA. We could put Wayne here along with Charlie Hennigan (Bienville) and Mark Duper (Moreauville) and Pat Studstill (Shreveport).

RB: Let’s take a deep breath and … Marshall Faulk (New Orleans) College and Pro Football Hall of Famer; Heisman winner John David Crow (Springhill); Charlie “The Human Bowling Ball” Tolar (Natchitoches) 2X AFL All-Star and league champion; Jim Taylor (Baton Rouge) a 4X NFL champ, Super Bowl champ, All-America, NFL MVP; Kevin Faulk (Lafayette) 3X All-SEC and 3X Super Bowl Champ, All-America; Tank Younger (Grambling) 4X Pro Bowler, NFL champ; Leonard Fournette (New Orleans) consensus All-America; Warrick Dunn (New Orleans)  3X Pro Bowler, Rookie of the Year. WHEW! Gasping for air here. And we must include the late and great Joe Delaney, AFL Rookie of the Year. BONUS GUY: He’s almost always forgotten, but Chris Cagle (DeRidder) is in the College Football Hall of Fame and a three-time All-American at Army, the first-ever three-time pick on Grantland Rice’s team (1927-29); he won the award that was the precursor to the Heisman and was on the cover of Time in 1929, in a three-point stance in his football costume/uniform. (He played three years at SLI before it became USL because it was the closest four-year school to DeRidder, THEN he went to play his three years at Army at the time such a thing was, by the rules, legal. Thank you to a connection at the Louisiana Sports Hall of Fame for that Deep Inside Skinny. Oh, not all was grand: he died, tragically, after tripping and hitting his head while falling down the length of subway stairs in Manhattan. He was 37. Bizarre.)

TE: Billy Joe Dupree (Monroe), the Cowboys great; again, NFL Hall of Famer Jackie Smith of Kentwood and Northwestern State was born across the line in Columbia. So we’ll go with Billy Truax, who played 10 years in the NFL after starring for LSU. Wait, what? Truax played at Holy Cross in New Orleans but was born in … Gulfport? Dadgum you Mississippi! (Bert Jones used to watch Karl Malone play basketball for Louisiana Tech and dream of him lining up at tight end for the Colts, which Karl could have probably done except for one thing: he didn’t like getting tackled. Pushing and shoving or taking a charge, fine. But negative on the tackling.)

C: Max Fugler (Ferriday) center on LSU’s 1958 national champs, Louisiana Sports Hall of Famer (as many on this list are)

T: Andrew Whitworth (Monroe), first with Cincinnati and now with the Rams and eventually headed to Canton, and Kevin Dotson (Plaquemine), the Steelers second round pick this spring and an All-American at ULL. The old meets the new. Also Marcus DeWayne Spears (Baton Rouge) who played nine years in the NFL after finishing at Northwestern State where he became one of only two FCS/Division I-AA players to make the FWAA All-America team. Ever. (The other is Jerry Rice out of Mississippi Valley.) And Willie Young (Ruston, played at Grambling), or William Joseph Lull Young if we’re using his whole name, and we are. He played 10 years/165 games in the big leagues and bye-bye to the poor corner who crossed his path. Let’s not forget that Anthony Clement (Lafayette/Cecilia High), all 6-8, 320 pounds of him, was a second round pick out of ULL in 1998 and retired 128 games later in 2008. Finally, Roy Waters comes in handy right there as he was the right tackle on Louisiana Tech football teams that went 44-4 in the early 1970s and won two (or three, depending on how you count ’em) Division II National Championships. Roy was voted as one of the Top 50 Players in Tech Football History recently; blocking Fred Dean every day at practice tends to make a guy improve. Or die. Roy was really good and got better.

DS: Trey Junkin: This is our Free Wild Card, like Steve Gostkowski on the Mississippi team, who was born in Baton Rouge but played high school in Mississippi. Junkin was born in Conway, AR but played college at Louisiana Tech before deep snapping in the NFL — for 19 seasons. (I know, right?!)

DE: NFL Hall of Famer Fred Dean (Arcadia) and Marcus Spears (Baton Rouge), a two-time consensus All-American and national champion (2003) at LSU. We’ve got Jaylon “Sack Daddy” Ferguson (Zachary), the NCAA’s All-Time Sack Leader. Throw in Leonard Marshall (Franklin), twice the DL of the Year with the NY Giants, and Neil Smith (New Orleans), who won two Super Bowl titles with Denver after a career with Kansas City that earned him a spot in the Chiefs Hall of Fame.

DT: Glenn Dorsey (Baton Rouge) won the Lombardi, Outland, Bronko Nagurski, and Lott trophies in 2007 when he was the SEC Defensive Player of the Year for LSU’s national champions; Kyle Williams (Ruston) was 13 years in the league with the Buffalo Bills and a 6X Pro Bowler after his college career at LSU. Coming off the bench is Gary “Big Hands” Johnson (Shreveport), Ernie Ladd (Rayville), and Fred Miller (Homer), a champion at LSU with Fugler and a Super Bowl champ with the Colts.

LB – lsiah Robertson (Covington) leads the way, along with A.J. Duhe (New Orleans), Devin White (Springhill), Roy Winston (Baton Rouge) of the Purple People Eaters. Backups are Rich Jackson (New Orleans), who went from free agent to 3X Pro Bowler and into the Broncos Ring of Fame; he played with his hand in the dirt in the pros but we need him upright here as he was while tackling everybody for Southern. And finally Bo Harris (Leesville), the 77th pick in the 1975 draft out of LSU; he played eight seasons with Cincinnati and in Super Bowl XVI in 1982. (“They’ll hit ’cha!”)

CB: Chiefs Hall of Famer and 4X Pro Bowler Albert Lewis (Mansfield) and Aeneas Williams (New Orleans) of the NFL HOF, who didn’t get a scholarship offer out of high school and didn’t play at Southern until his junior year; that’s how much of a stud this guy is, two years into an accounting degree before he walked on for the Jags. Tyler “Honey Badger” Mathieu (New Orleans) is trending in this direction, although he’s more of a secondary rover or monster man.

RS – Brian Mitchell (Fort Polk), whose college return stats at USL are 0 chances, 0 yards; he was much too valuable at QB to return kicks. He holds NFL records for kick return yards (14,014), punt return yards (4,999), and postseason kick return yards (875). He’s in the Washington Redskins Ring of Fame.

Now, The Governor and Mississippi are not short on studs, but they might want to add referees to the Magnolia State’s team to have a chance against our guys.

And just as a throwaway, this will keep somebody busy if they want to come up with a team to beat The All-Boot Basketball Team.

Center: Willis Reed (Bernice) and Robert Parish (Shreveport) and Bob Pettit (Baton Rouge) and Rick Robey (New Orleans). Bill Russell was born in Monroe but played high school in Oakland or he’d be on here too. Embarrassment of riches.

Tell you what; this is not fair. Let’s make this an All North Louisiana Team only, to give everyone a fightin’ man’s chance. Take out Robey. And Avery Johnson. Even Chaney and Kittles and, Lord have mercy, Pettit. Good luck!

As a great man once said/wrote, we’re going to kick rear ends and take names.