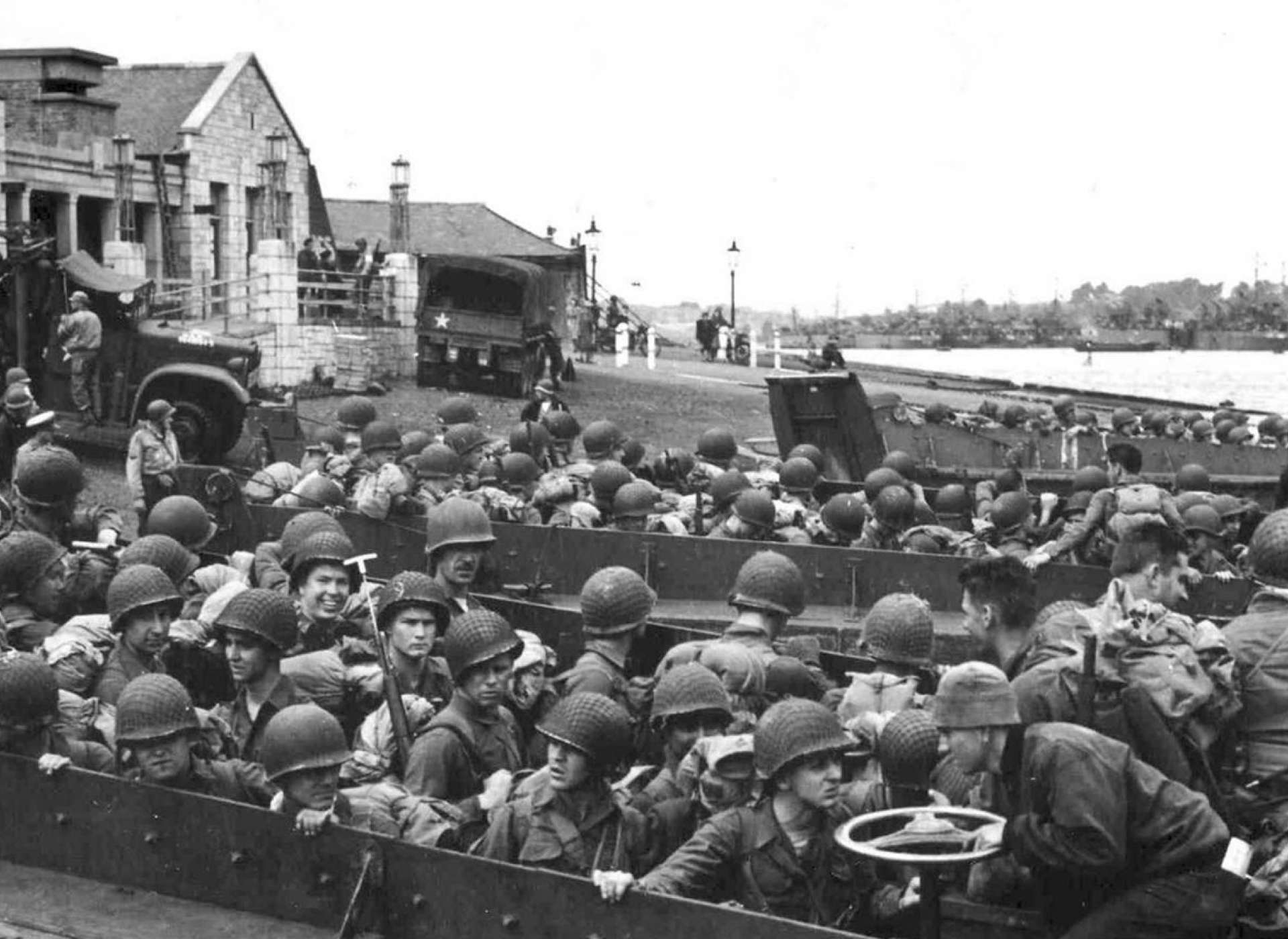 D-DAY: THE DAY OF A LIFETIME 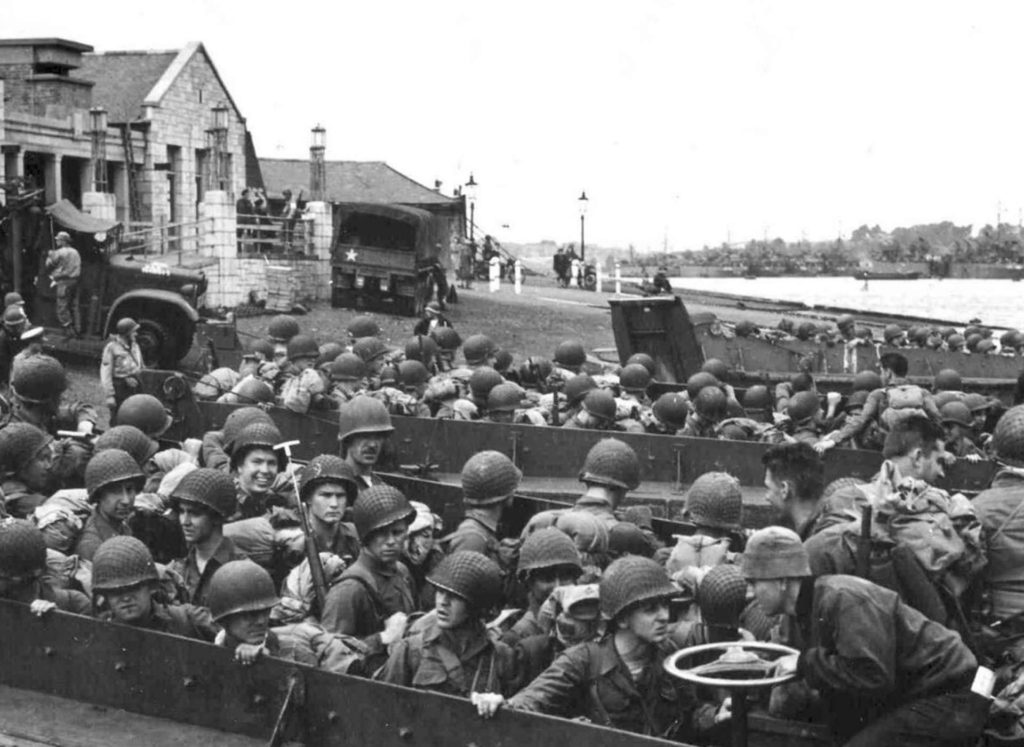 Designated Contributor Nico Van Thyn wrote this five years ago. Never hurts to read it again, for all sorts of reasons…Nico’s feelings about the day are a bit more sensitive and meaningful than ours, most likely.

It was the most monumental day in the modern world’s history, and the reason I say that is because that’s what my Dad always told me.

If not for the events of June 6, 1944 — a day of great heroism and great tragedy — Dad likely would not have been a Holocaust survivor. Same for my mother.

Because they survived, because of the unprecedented surge of military force on a foreign shore, my life became a reality three years and 10 days later.

Without the D-Day invasion, without those American, Canadian and British troops storming the beaches in Normandy, France, and marking the turning point of World War II, what would have happened?

Who knows how much longer they and the fellow concentration-camp prisoners at Auschwitz-Birkenau or, in Dad’s case, the Janina mining camp, would have survived the Nazi hell.

My Dad, and my mother, were forever grateful for D-Day. As soon as he thought I was old enough to understand, Dad explained how much June 6, 1944, meant to him and to us. And, of course, to the whole world.

We talked about it over the years, especially on June 6, but I don’t remember what, or if, he talked about the question that’s on my mind now, one of those hundreds of questions I wish I could go back and ask.

When did the people being held in the concentration camps, people like my parents for whom the outside world had been closed by the Nazis for almost two years and who had been under German control for more than four years, learn about D-Day?

They must have, I am guessing, heard rumors in the camps or noticed the increased worry shown by the SS and other Nazi guards. Dad alluded to that in his 1996 USC Shoah Foundation interview on the Holocaust when he noted that in June 1944 the prisoners in his camp were forced to stand at attention for 24 hours.

It took another half year, with the prisoners’ physical and mental conditions deteriorating even more than they already had and the Germans becoming more desperate — it was obvious by then they were not going to “win” the war — before the Allied forces, the Russians from the right and the (mostly) Americans from the left — discovered the camps.

They found the harrowing barracks and heavily fenced-in enclosures and — yes — the gas chambers, with the smell of death, all around … and the survivors, many of them devastated and clinging to life.

Dad was one of those, probably in better condition than many. It was the Russian Army that came into the camp hospital at Janina where he and 27 others remained when the Nazis bolted in January 1945.

My mother also was rescued by the Russians after she and a dozen other women from Auschwitz’s infamous Block 10 — the medical-experiment block — had been forced to walk through the southern Poland woods for a couple of weeks.

In both my parents’ cases, the Russian Army provided some basic necessities but not much comfort. My Dad began a circuitous route back home — Antwerp, Belgium — where he’d been living with his first wife before the German occupation.

My mother and her buddies were told by the Russians that an American Army camp was nearby, and they went there to receive — as my mother always told it — royal treatment. There, she decided, America was a place she wanted to live.

They would not have been there without the D-Day invasion. I think it’s natural to assume that.

I am no student of wars and, frankly, don’t relish reading about their history. I read enough about World War II and the concentration camps because I’ve heard about them almost all my life and because I needed background for writing the chapters in my Dad’s Holocaust story.

In preparing to write about D-Day, I read some Internet stories and watched a few minutes of a couple of YouTube videos. It was difficult.

I have always thought of the nearly impossible mission the Allied forces had storming those beaches, with the German machine guns set up to mow them down.

It took wave after wave of men jumping from the boats into water deep enough to drown many with their packs of equipment sending them to the bottom and, if they surfaced, making their way to the sand, somehow dodging bullets hitting rapid-fire all around, and then fighting through obstacles such as hedgehogs and stakes and a sea wall and rows of barbed wire … and land mines.

How the heck did they do that?

I could go on and give you the facts and figures, the details, but there are a hundred thousand sources for that. I just marvel at how it all happened.

When the movie The Longest Day came out in 1962, it was billed as the story of D-Day. My Mom and Dad wanted to see it; for some reason — I guess because they thought we could handle it — they took (my sister) Elsa and me along. We saw it, as I recall, at the old Sunset (Acres) Drive-In in Shreveport.

Tell you now, I couldn’t handle it. I’ve not forgotten how uncomfortable it made me. Never wanted to see it again.

I looked this up online to recall the movie. This was a helluva production, the story told from the Allied and German perspectives, with a spectacular cast. The billed stars, from imdb.com, were John Wayne, Robert Ryan, Richard Burton and Henry Fonda. Some of the other notables in the cast (alphabetically): Eddie Albert, Paul Anka, Red Buttons, Sean Connery (he wasn’t yet Mr. Bond), Richard Dawson, Fabian, Mel Ferrer, Peter Lawford, Roddy McDowell, Sal Mineo, Robert Mitchum, Tommy Sands, George Segal, Rod Steiger, Robert Wagner.

Here’s what I remember most: The scenes of the men crossing the beach, stepping on the land mines and being blown away. Too graphic for me then. Six years later, that scene would play out in real life, in Vietnam, to Trey Prather, a good friend and one of the greatest athletes I’ve known.

The Longest Day and the “greatest generation” (thank you, Tom Brokaw, who helped made that term for those World War II veterans a common expression). That was D-Day.

It strikes me today — on the 70th anniversary of D-Day and as some of the world leaders and the veterans of the invasion gathered on the beaches at Normandy to honor the day — that most of the Holocaust survivors and most of the men in the armed forces have left us.

Even the veterans who might’ve fudged their age and enrolled in the military before they were 18 are nearly 90 now. But as they leave us, it is up to the generations who followed to honor their memory — and we will.

God bless those people, the leaders’ vision and the courage of the men who carried it out and ended the insanity of World War II. God bless those who were lost on D-Day and those who survived … including the two people who gave me life.

Greatest generation indeed. Monumental day. My Dad told me that.