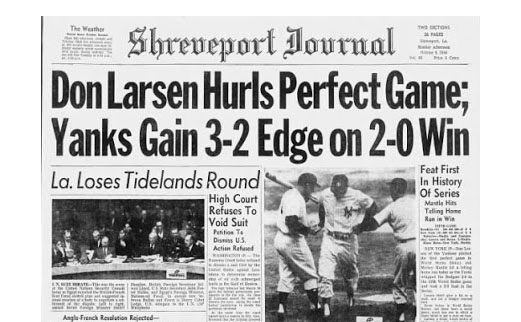 Don Larsen: Perfect for My Scorebook

(Visit nicovanthyn.blogspot.com, Once A Knight, for more Nico…)

My baseball travels — limited but fun — never put me in the same place as Don Larsen. But he was a big part of my early baseball days.

Don Larsen and I were scorebook buddies, if you will.

When he died (of cancer) on New Year’s Day at age 90, my first thought was about my little blue-covered baseball scorebook, a birthday present in 1958 when I turned 11.

I knew, I remembered, that one of the games I scored in that book — my first efforts at scoring baseball games, something which would become a recurring theme in my sportswriting career — was Larsen’s Game 3 start in the 1958 World Series.

Dug into the files downstairs for that scorebook and it reminded me of how often I saw him pitch in the late 1950s.

He won that game 4-0, with seven dominant innings (and two more from fire-throwing, thick-glasses reliever Ryne Duren), both of them hard-drinking Yankees stars of the late 1950s.

It was arguably Larsen’s second-biggest pitching victory of a 20-year pro career (14 in the big leagues). The Milwaukee Braves, defending World Series champions after their 1957 conquest of the Yankees, had won Games 1 and 2 of the ’58 Series, too.

So they really needed Larsen to come through that October 4 at Yankee Stadium. But, of course, they knew he was capable. He had proven that on October 8, 1956.

His perfect game that day — the greatest game ever pitched in baseball history (and let’s not argue about that) — made him a forever Yankees and baseball legend.

That fall, ’56, we were new to this country; baseball was a new sport to us. But having seen the Yankees on TV a few times that summer, I liked the pinstriped uniforms, I liked the looks of the center fielder wearing No. 7 on his back, I liked the winners. It was the start of a lifelong love affair.

I remember that the result of that game was the big headline in the Shreveport Journal — the afternoon paper — that day, by the time we got home from school. We had begun taking the newspaper not long after arriving in the U.S.; those sports pages helped me learn to read English much more quickly.

Because World Series games, all in the afternoon, began at noon Eastern time, 11 a.m. Central, and the game  lasted only 2:06, it was over by 1:06, so the Journal got it into its city edition. They slipped Larsen’s head shot in at the bottom of Page One.

I hardly knew how significant it was, did not really understand what “perfect game” meant, but did realize that it gave the Yankees a 3-to-2 games lead in the Series over the Brooklyn Dodgers.

And Don Larsen came into my life.

By 1958, I did know how important his Game 3 victory was. And I knew that just about every time the Yankees were on TV, and I recorded a game in my little scorebook, he was in the lineup one way or another.

Scored a dozen games in that book, all Saturday afternoon “Game of the Week” television games — the only baseball game each week on TV in those days, on CBS (Channel 12, KSLA, in Shreveport). Dizzy Dean and Buddy Blattner were the announcers. Simple days.

Four of those games were Yankees vs. Boston Red Sox (so what’s new?) — and Boston won them all (but the Yankees, winning the American League for the fourth year in a row, finished 13 games ahead of the third-place Red Sox in the standings).

In the first game I ever scored, Don Larsen was the losing pitcher with five mediocre innings.

He also was the losing pitcher in a significant game I scored on September 20, 1958 — a no-hitter by Hoyt Wilhelm of the Baltimore Orioles, the most-often-used relief pitcher in baseball history for years and years, the old knuckleball expert making a rare start.

(It would be another 45 years before the Yankees were no-hit again, by six Houston Astros pitchers on June 11, 2003.)

Wilhelm’s knuckler was at its dancing best, but Larsen was darned good, too — a one-hitter for six innings. The Orioles won 1-0 on Gus Triandos’ seventh-inning home run off little lefty Bobby Shantz. It’s right there in my scorebook.

In two other games I scored, Larsen did not pitch. But — because he was one of baseball’s best hitting pitchers of his day — he pinch-hit. He walked and scored vs. the Red Sox in August ’58; he struck out against the Cleveland Indians in a May 2, 1959, game.

I recall being so happy to have scored his 1958 World Series Game 3 victory. He wasn’t perfect — he gave up six hits — but he was tough, and so was Hank Bauer at the plate — a two-run single in the fifth, a two-run home run in the seventh.

Larsen was a big, rangy guy for his day, a talent whose reputation was as an often wild character away from the stadium. His nickname: “Gooney Bird.” No secret he liked his nightlife and his drinks.

He could be luckless — evidence was a 3-21 record for the  Orioles in 1954 and 1-10 for the Kansas City Athletics in 1960, both awful teams — and could be lucky, the trade to the Yankees before the 1955 season as part of a historic 17-player deal with Baltimore that also sent fellow right-handed pitcher Bullet Bob Turley to New York.

He was good enough that manager Casey Stengel turned to him in big games. That start on the day of The Perfect Game was crucial because the Series was tied.

Another Larsen contribution to the Yankees, not of his doing: They traded him away before the 1960 season to the Kansas City Athletics, along with Hank Bauer — a wonderful right fielder for the Yankees for a dozen years — and others. The main piece the Yankees received in the deal: Their new right fielder, Roger Maris.

So Larsen helped bring in Maris. A very good trade.

In 1962, Larsen pitched in another World Series — against the Yankees. He worked briefly in relief in three Games (1, 3 and 4), and — luckily — was the winner in Game 4, although he pitched only one-third inning and faced only two batters (walked one).

After his Yankees career, Larsen pitched for six MLB teams over eight years, but only briefly for more than two years with any one team (Giants, 1962-63-six games in ’64). He made only 14 starts after 1960; his last majors stop was with three games with the Cubs in 1967.

His final three seasons were mostly in the minors, including Texas League stops (Dallas-Fort Worth in 1967, San Antonio in 1968). A personal memory: Larsen pitching — in relief — for the San Antonio Missions against the Shreveport Braves in ’68, the year our city returned to the TL. Larsen lost one game to the Braves in the ninth inning; he earned a save at our not-yet-faded old ballpark.

A few weeks later, he retired from the game, with an 0-4 record for the Missions. He was 39, a legend forever.

In recent years, our views of Don Larsen was at the Yankees’ Oldtimers Day, on his introducing making his way onto the field using a walker. Almost every year, he was greeted by and sat next to Dr. Bobby Brown, the Yankees’ third baseman of the late 1940s/early 1950s.

Dr. Brown, at 95 now the oldest ex-Yankees star at the Oldtimers’ Day festivities, resides in our seniors facility in Fort Worth. The gracious, story-telling Doctor was — like Larsen — a Yankees World Series star, with key game-tying and game-winning hits in 1947 and 1949.

His MLB career, interrupted by two seasons in the U.S. Army during the Korean Conflict, ended in 1954, so he was never teammates with Larsen. (Dr. Brown then had a 25-year career as a cardiologist in Fort Worth, followed by 10 years back in baseball as American League president.)

He and Larsen talked often at the Oldtimers’ Day weekends, and had a connection. Larsen lived on a lake in North California where Dr. Brown’s brother, a carpenter, built his own home.

Dr. Brown was a high achiever all his life, in several phases, certainly considered a hero by many people.

Don’t know that “hero” describes Don Larsen. I would say, was an underachiever for his baseball talent. But no question, he was the ultimate overachiever on one perfect day and he won’t be forgotten.

He was a big man in my scorebook.