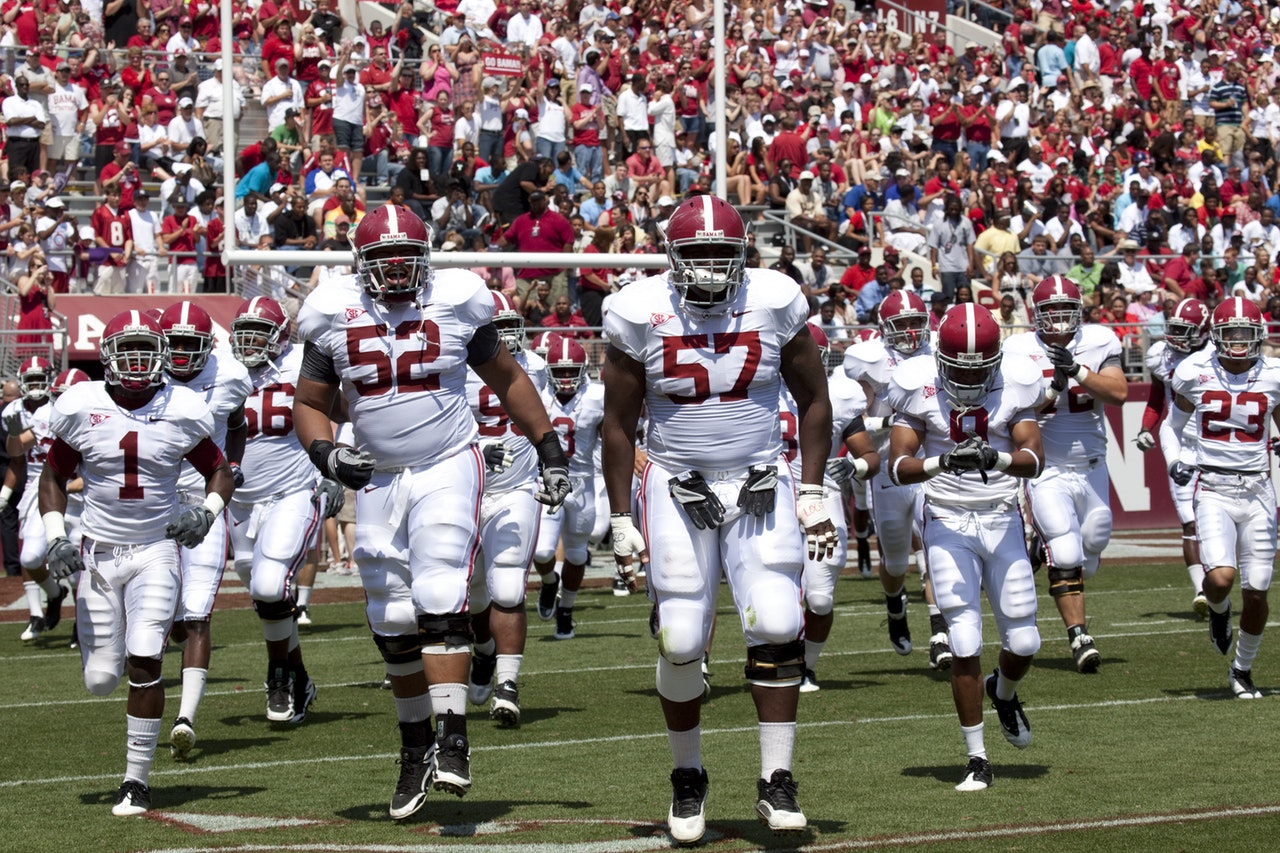 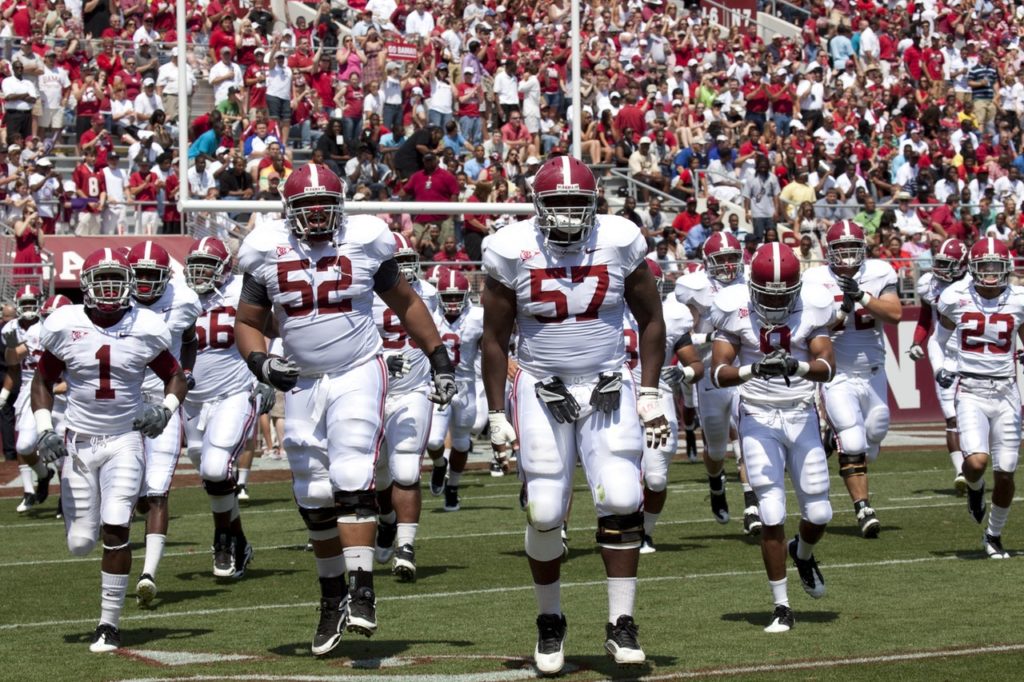 Second Thought: Whether it makes me a good person or a bad person, I love the Heisman House commercials. #HeismanHouse Not ashamed of this. They aren’t all good but most of them are, and it is fun to remember these guys…They brought me lots of joy. And because of this ad campaign, they still are.

(I’m not going to keep up with the number of thoughts anymore, but they will be in chronological order, and in the order in which they happened. Wait…what?)

The Zac Brown Band boys are very talented. Write, play, and sing. Triple threats. I usually don’t listen to the Anthem or to anything until the kick but I saw the Bearded Band and turned it up. I should have turned it back down before the Right-Before-Kickoff Coach Interviews, which are more useless than a cereal bowl with six holes in it.

Georgia gets the opening kickoff, a touchback, and then 14 Alabama defenders are in on the tackle on the first play from scrimmage. That is not a good sign for Georgia, right? Of course I have Georgia winning 24-21. Of course Alabama will win by 40.

Third play from scrimmage: Bammer guy intercepts after Georgia guy catches it. Well allrightsir. I was wrong: Bammer will win by 50. I was too conservative.

(Don’t you always do this? You think about how a game will go and you really don’t know but you pick one team and they have a horrible first series and you say, ‘Well, I knew it. I should have bet $1 million on the other team.’ But you’ve seen a lot of football and you know one opening series does NOT determine a game and still … this is how our minds work. At least how mine does. In sports, reality has little to do with how you think and a lot with how you feel. This is a blessing and a curse — and the beautiful thing about ball.)

On third-and-8 around the Georgia 30, Alabama QB Jalen Hurts is back to pass and … scrambles for a first down. If I am the Bammer offensive coordinator and just joined the team TODAY, I would feel good about calling the QB draw just about every play. Sure, we’d pass some time for reals, but “QB draw” is not a bad Bammer play.

Hurts, who I guess should have run the QB draw, instead overthrows his receiver in the end zone after the Georgia defender falls down. Will that make a difference? I guess. Now Bammer will win by only 36 points instead of 40.

(Joke. Guy walks into a bar and orders a drink and hears a voice that says, “Nice shirt.” He sees no one but the bartender at the other end of the bar. Then he hears the same voice. “Nice tie,” it says. Then “Hey, who’s your barber? That’s a nice haircut.” So the guy hollers down to the bartender, “Hey, do you hear somebody talking to me?” And the bartender says, “Yeah. It’s the peanuts. They’re complimentary.”)

Now Bammer misses a field goal try after a motion penalty so maybe they’ll win by only 33.

Georgia kicker Rodrigo Blankenship looks like Charlie Brown would look if he played in the SEC. Georgia leads 6-0 and is showing they might be faster on defense that Bammer is.

Hurts with first big play of the night!, or anything that would resemble that form Bama. But UGA gets a blindside sack and Bama punts — inside the UGA 5. 5 minutes left in the half. Will Jake Fromm, the freshman QB, make a mistake? I mean, he is a freshman and all.

NEG. Finds Riley Ridley with a crossing route. Passing from the end zone.

I am surprised the Bulldogs are trying to score with a minute left from deep into their own territory. But as somebody who picked UGA, this is a good thing. If you aren’t aggressive, you can’t beat the Tide.

Good grief. Georgia is going to get a field goal? 35 seconds left in the half? WAIT! Georgia scores a touchdown! The Bulldogs were helped by a Roughing The Human penalty and a Player Getting Off The Field Late. So, it will be Armageddon at halftime in the Bammer locker room, which I am glad I am not in.

And I was just joking. It will not be Armageddon; it will be much, much worse.

IS THIS REALLY THE HALFTIME SHOW OR HAS SOMEBODY HACKED ESPN???!!!

Was the Alabama offensive coaching staff in charge of this halftime show?

Bammer decides it will be aggressive in the second half?, returning the opening kickoff from deep in the end zone? Returns to the 22. And Bammer starts its second-string QB!, Tua Tagovailoa, who replaces the 2016 SEC Offensive Player of the Year and 2017 Davey O’Brien Finalist, Hurts. Don’t know how good he is but you gotta admit, Tua Tagovailoa has depth at vowel.

And Georgia is offsides on a blocked punt although the Bulldogs aren’t really offsides; instead Bammer false-started so the Tide gets to punt again. Such is life. Not fair. Must battle. Must summon.

The officials make it up by missing a call on Bammer for face-masking a Georgia guy. WAIT. No. TWO calls go Bammer’s way. Will it make a difference? Right now, Bammer needs all the help it can get.

Bammer threw a ball downfield! Dear lord! And it’s a TD if it was not just a bit overthrown by Tagovailoa. (Overthrown has only two vowels: there’s your problem. “Completed” has three. Which would have been seven points. It’s the little things.)

And on the very next play, The Human Vowel escapes the pocket and runs for a first down. Inconceivable! Still, the youngster/freshman makes it happen. Will that end up being the biggest play of the game?

(Remember the two missed calls against UGA, by the way. The human element involves not just the players; it’s the zebras too. Will it make a diff?)

Good grief! Now Georgia comes out gunning after getting pinned on a poor kick return. Slant for a first down, and on a 3rd-and-11, the OTHER freshman quarterback playing in the game, Fromm, throws a deep ball down the sideline to Mecole Hardman Jr. Catches it at the 40 and stays inbounds and scores. Four plays and “only” 93 yards, and there is no way the junior Hardman should be able to stay inbounds with the big Bammer DB pulling him down — except he does. What an answer from Georgia, the leaders now at 20-7.

And now Tua Tagovailoa throws an interception into traffic. (Interception has five vowels, so I’m starting to feel vowels really don’t matter in football, which has three.) Georgia’s ball. Georgia’s momentum. Georgia’s 20-7 lead. But it ain’t over.)

And it ain’t! Bammer Fat Guy intercepts a ball deflected off a HELMET. Lawdy lawd! Bammer first down at the UGA 40. Bammer gets a field goal out of it and Georgia leads 20-10 and this second half is an SEC game if it mated with a Big 12 game.

So with 5:04 left in the third, you get the feeling anything could happen. Except Bammer winning by 40. Not gonna happen. (Maybe Georgia will win 24-21 as I predicted, but that would take two safeties, and I doubt it. 23-20, I can see.)

Into the fourth quarter we go with Georgia leading 20-10 and with the ball, and with two true freshmen at quarterback, which coaches say you can seldom win with, which makes sense, except, well, tonight…

Georgia is 8 of 15 on third down. Excellent. Now Georgia is 8 of 16, still very good, but the freshman QB was sacked by a Bammer Big Guy. The beautiful thing if you are a Georgia fan is that your freshman QB did not try to do something non-human then or at any other time during this game. Some of his passes have been ducks. Some have been poorly thrown — but not where anyone else BUT a Georgia receiver could possibly catch them. He’s outplaying the Bammer sophomore/freshman QB duo. Bammer has the ball with 11:39 to go from its own 20 and This Is Big, What Might Happen Here.

And goodness, Bammer is at midfield in two plays.

I sneezed and Bammer is at the 14!

Andy Pappanastos’ field goal for Alabama makes it 20-13, Georgia still leading. Andy Pappanastos has five vowels, and “y” is sometimes a vowel, so … what that means, I do not know. But the outcome of this game is still in question and things are looking good for Bammer, vowel-wise.

Georgia is stopped on 3rd-and-two, mainly because Bammer’s defensive tackle/nose guard Da’Ron Payne is 6-2, 308, and is very good. And very big. And quick. Strong. Georgia ran at him and…it didn’t work out. Bammer’s ball at the their own 34, 7:10 left.

Is Georgia tired? Are the Bulldogs arm-(non)tackling now?

Bammer has the ball on 3rd-and-9. 6:12 left. Georgia called for pass interference. (A case could be made that the Bammer receiver tripped?) First down Bammer!

We are watching a tilt of semi-biblical proportions.

Remember a minute ago when Georgia was stopped on a 3rd-and-2 by a Bammer Fat Guy? The same thing just happened on 3rd-and-3 from the Georgia 6, except this time it was a Georgia Fat Guy who stopped the Bammer back for a loss of 1. Fourth-and-4 from the Georgia 7. 3:57 left. Nice game. Bammer going for it…

LIKE BEING ABLE TO THROW OFF YOUR BACK FOOT! The Human Vowel throws to Calvin Ridley for the touchdown, an improvised TD after The Human Vowel broke from the pocket, and the TV commentators talked about how he didn’t give up on the play to Ridley, but I wonder if, actually, he was throwing — trying to throw — to Najee Harris, who was crossing the other way BEHIND Ridley, and Ridley just happened to be there? Regardless, TD and tie game.

20-20 and we are under four minutes and Georgia goes three-and-out after Fromm misses an open receiver. BIG MISTAKE. Because now you wonder…Bammer can win this after all?

So overtime. Which we should have bet on since the Mayhem insurance guy returned a few commercials ago. Fits…

And of course this was the only way that it could end. Georgia kicked a field goal. Bammer’s true freshman quarterback, who had played about zero minutes all year long, got sacked for minus-16 yards on the Tide’s first OT play. And then, as true freshmen always do in national championship games in overtime (yawn…), Tagovailoa throws to his fellow true freshman, Devonta Smith, of Amite, Louisiana, for a 41-yard touchdown.

But not for just a touchdown.

For a 26-23 Alabama national championship.