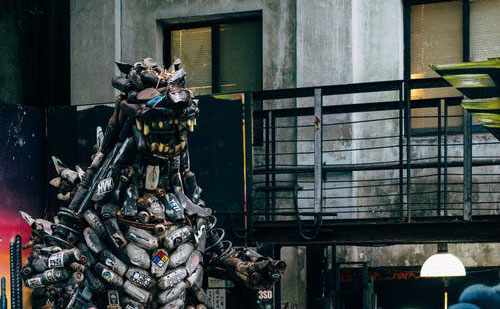 THAT WEEK GODZILLA AND KING KONG CAME TO TOWN

During this week’s epic snow and sleet storm(s), the latest in a long line of unexpected, never-dreamed-of, head-scratching events over the past 12 months, you were allowed to ask some questions that would seem odd in other years but perfectly legit in this one.

Like maybe, “What’s next? What could POSSIBLY be next?”

Godzilla walking up out of the Red River to terrorize the landscape is all that’s left—and you won’t catch me betting against it.

If there’s a knock on the door and I open it and King Kong grabs me by the throat and starts climbing a skyscraper, I’ll be screaming and scared to death, but the one thing I won’t be is surprised.

Seriously. All year long, nobody’s really known what’s going on. Nobody knows when or what or how or why. If you ask somebody a question that has to do with a schedule or a time or the probability of something that is supposed to happen no more than a day or two away, it’s better than even money that the answer will be, “I don’t know.”

These days you’ve got to be limber as a willow tree in a hurricane.

Rico is an old friend from high school who made it big in the insurance business in south Louisiana. After 40ish years in the biz, he announced in February 2020 that he would retire at the end of February 2021, which is the end of this week.

What a year he picked to go out. Here’s his 2020-21 Insurance Business Scorecard:

The late summer hurricane damaged his house and pretty much destroyed his office, which was set to reopen this week until—snow and ice storm.

Hope he has insurance.

Most unnaturally, we get this chilly semi-natural disaster this week, the latest in a long line, even though we yelled “Uncle!” about eight months ago.

Several people who’ve lived in north Louisiana all their lives (so far) have said they’ve never experienced anything like this week’s snow and ice event. And apparently everything really is bigger in Texas, including power outages. Texas hasn’t seen this sort of arctic temperatures and wind chill since the 1940s.

In Shreveport, the low Tuesday was one degree. That shattered the record by 19 degrees. In comparison, the world record in the 100-meter dash is 9.58 seconds by Usain Bolt; if somebody ran it in 7.58, that would be like breaking our record for an all-time low by 19 degrees.

That’s the kind of chill that’ll freeze your gigawatts off.

Pictures you don’t expect to see in this part of the world are cratered structures caused by the accumulation of…snow? Who would have thought? One picture I saw was of my brother-in-law’s Charger crushed by a canopy that proved little match for the snow. His Charger was blue. Now it’s black and blue.

These days, that’s getting off mighty easily. Because of this unlikely record-breaking winter storm, people are at risk of hypothermia and challenged by contaminated water and food shortages.

You can hardly complain about no mail delivery or trash pickup this week when all any of us are really trying to do is not fall down and break a wrist or bonk your head on the ice.

An old soul reminded me this week to “be useful,” and that “every day you make your partner laugh is a good day.” Amen.

Another told me not to miss the beauty of this rare sight of snow, and so I looked and appreciated how beautiful it was, and after that five seconds was up, I imagined the pipes likely to burst below it and felt how much more I’d appreciate the beauty of some sort of weather in the mid-70s.

True, Mother Nature remains undefeated. But we have to keep putting up a fight. Wish I could tell you for how much longer but …