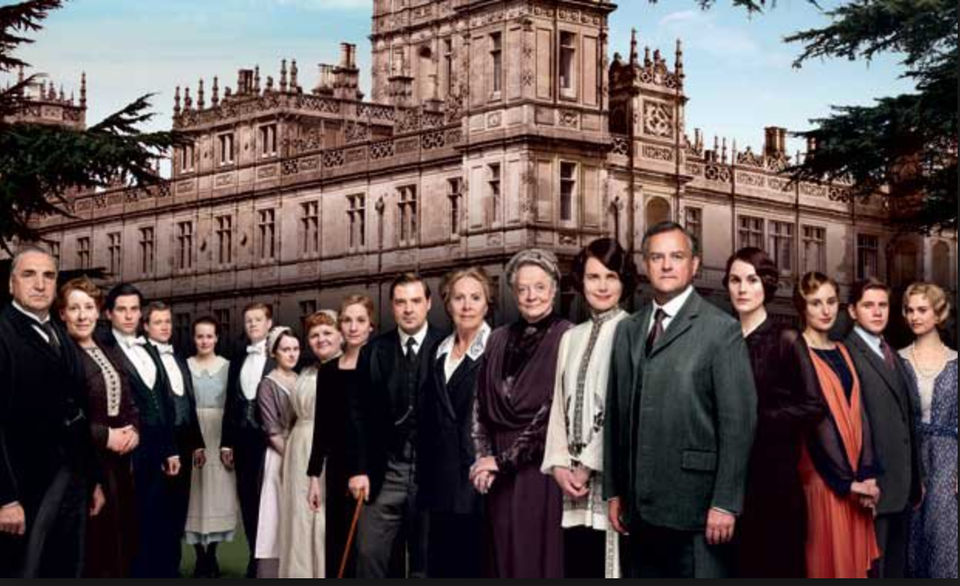 AN UPTOWN BRUNCH TO CELEBRATE ‘DOWNTON’

(Ran originally in Sunday editions of The Times and The News-Star September 29, 2019.)

Every now and then you step out and do something fancy just to try and prove to yourself you’re no bumpkin.

You know, something like show up for a half hour at Christmas in the Sky. Dress up in a tuxedo. Wear underwear. That sort of thing.

But last Saturday morning and early afternoon might have been a personal high-water mark. I was completely out of place and knew it. Still had a ball.

The phenomenon that is Downton Abbey is alive again thanks to a full-length movie, a spinoff of the PBS series that ended in 2016 and, according to London’s Daily Mail, earned the most nominations of any international television series in the history of the Primetime Emmy Awards, with 27 in total after only two seasons.

The series follows the wealthy Crawley family in their Downton Abbey estate and the servants who live downstairs. When the series began, the year was 1912 and the Titanic had just bit the dust. In the new movie, the year is 1927, the New York Yankees are on their way to another World Series (the Crawleys are not a baseball people as no one ever mentions this) and King George V and Queen Mary (the one the big ship is named after) are staying for a night at Downton on a tour of Yorkshire before they visit their daughter, who lives nearby.

The movie covers the day the letter announcing the royal visit arrives at Downton from Buckingham Palace until the King and Queen say “Cheerio!”

And apparently, this England gang was missed. Downton Abbey’s release in the United States last weekend brought in $31 million dollars, about $12 million more than either the Brad Pitt movie Ad Asrta or the final installment (we can only hope) of Sylvester Stallone’s Rambo series.

It’s plain as the bonnet on a maid’s head that many of us think it’s a good thing to have the Yorkshire band back together again. The whole movie could have been about no one but the butler, Mr. Carson, and I’d have been happy as a Buckingham Palace Royal Guard with a fluffy new hat.

Many weeks ago, Robinson Film Center at 617 Texas Street in Shreveport announced a few special screenings—with brunch or dinner or tea—and my alert spousal unit nearly pulled a muscle getting on the computer at the appointed time to secure tickets, which she did with no time to spare. Dependability when the pressure is on. Were it not for the restricting wardrobe, she could have easily enjoyed a career in service at Downton.

So Saturday was much anticipated at our crib.

The final Saturday of summer dawned and suddenly there we were, dressed like the 1920s and in downtown Shreveport for a 9:45 fancy schmantcy brunch and “special viewing” of Downton Abbey on the Robinson’s Big Screen.

Mercy. A tip of the fedora to Robinson executive director Meghan Hochstetler and her brave crew who made it happen. The whole thing was—and here’s a word I seldom use—charming. It was very Downton Abbeyish.

There were white tablecloths. Biscuits Mrs. Patmore (Downton reference for you insiders) would have been proud of. Eggs and grits and chicken fried steak because we’re still in the South. Fruit. A tea table. And even trivia and costume contests. Plus Dr. Cheryl White, associate professor of history in the College of Arts and Science at LSUS, gave us a brief and entertaining insight on the era, which might have been the Edwardian Era; my biscuit was so good I was on sensory overload and was having trouble digesting everything the Robinson was chunking at me.

My crew did not win anything but we were still the winners after making new friends at the brunch and catching up with old ones on the screen. Violet and Isobel sparring. Daisy being the Cook of Reason. Mr. Bates finally not getting on my nerves. Mary taking her hat game to the next level. (Oh, that women still wore hats; my grandmamma Ruth had a dozen and the women who attended this special Saturday wore them like pros.)

No car chases. No murders. No cursing. Just people I never knew existed, existing. A new world from the Old World.

And Mr. Carson. A standout at the Butler Combine whose romance with Mrs. Hughes is the stuff dreams are made of.

And finally, my man Mr. Molesley. Writer and show creator Julian Fellowes let the often overlooked valet show his comedic chops. If this show had a Barney Fife, it would be Molesley.

If you’ve not tried Downton Abbey, give it a shot. I never knew such a world of privilege and service under one very large roof was once a way of life. But it was. And it pretty much ends in the movie. You get the feeling that it’s not a man’s world anymore. And it ain’t, even if it ever really was.

The special viewings at Robinson are over but go to the website, http://robinsonfilmcenter.org/#/downton-abbey/, to see future show times. The just-over-two-hours movie is also playing in Ruston and in West Monroe.