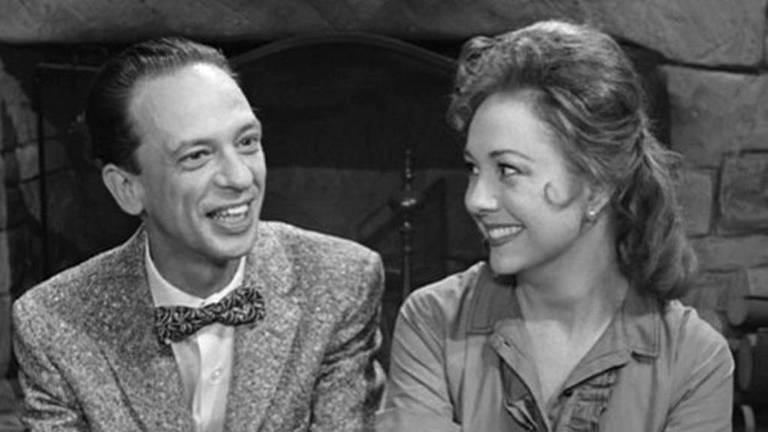 AN EVENING ON THE PORCH SWING WITH THELMA LOU

She lived alone but was a friend to all in a small North Carolina town an hour’s drive from Mount Pilot, worked at an office in town, stayed in a small and neat home (number 830) with a front porch swing, had a head of auburn hair and a heart of gold, and eventually married the town deputy who always said she was “the cat’s.”

Thelma Lou. Like Madonna or Cher or Pink or Beyonce, she doesn’t need a last name. Not when you’re “the cat’s.”

Not when you’re Thelma Lou of Mayberry.

When Betty Lynn, who appeared as Thelma Lou in 26 episodes of “The Andy Griffith Show” in the early 1960s, died at 95 this week, it left Ron Howard, who played red-haired little-boy Opie, as the only regular cast member still alive. (“Opie” is 67 now, which means that some of us are “getting on up there.”)

Actress Elinor Donahue, who played Mayberry pharmacist Ellie Walker and left the series after Season 1 in 1960-61, is 84. Other now-and-then characters are still alive. But the heart and soul of Mayberry as breathing personalities, that’s memory now.

Thankfully, Mayberry’s timeless relatability is alive and well. We’ve all known a Barney and an Andy, an Aunt Bee and Miss Crump. We’ve been little people and had the same problems as Opie.

And what other precious soul would keep going out with Barney, such a cheapskate that the two always went Dutch treat on dates because Barney believed that “the best things in life are free.” That is so Barn. And her reaction is so Thelma Lou. She overlooked his faults and protected him. Cherished him. One of the great romantic couplings in TV history.

Sunday, it’s church. Tuesday night, 8 sharp, Barn goes to Thelma Lou’s house to watch “that doctor show” on TV and sit on the couch and eat fudge. Thursday night is the diner for the special. Friday nights, if Barney is working, it’s coffee at the courthouse.

Thelma Lou is the cat’s even when she’s not on screen. Once after a Sunday sermon and lunch at Andy’s, Barn rocks on the sheriff’s porch with his eyes closed and says, “I’m gonna go home, then go over to Thelma Lou’s and watch a little TV … Yeah, I believe that’s what I’ll do. Go home, have a nap, then over to Thelma Lou’s for TV … Yep, that’s the plan, go home, little nap…”

So beautiful. Who can ask for anything more?

And now and then, Barn will tell her, and he means it: “You know that you’re the only one I ever gave a hoot for.”

Naturally, no woman reading this would do anything less than chunk Barn to the curb. And his one bullet that Andy made him keep in his pocket.

But not Thelma Lou.

Although it’s falling apart, I’m looking now at a prized paperback possession, “The Andy Griffith Show Book,” written by stud fans and keepers of the flame, Ken Beck and Jim Clark, copyright 1985. They have reminded me that “among Barney’s gifts to Thelma Lou are a fur stole that fell apart (set him back $13.25) and a $2 pineapple skinner. He once bought her a half gallon of West Indian Licorice Mocha Delight ice cream (cost him forty cents). The nicest birthday gift he ever gave her was dinner at Morrelli’s, where they had the deluxe special.”

The DELUXE special. What a romantic, that Barn. And Thelma Lou. What a gal.

Our friend and Louisiana Sports Hall of Famer Ted Lewis interviewed Betty Lynn a few years ago in Mt. Airy, North Carolina, Andy Griffith’s hometown and the place where Betty Lynn moved in her later years into a retirement home. His favorite part of the interview was her telling him about a little girl who recited her lines from the “Barney and the Choir” episode — “But Barney can’t sing. Not a lick!” — and also she was having physical problems in old age but she always found a way to get to the town library on certain days to sign autographs because of how much better it made her feel.

So sure, Thelma Lou was the cat’s. But as it turns out — and we knew it would — so was the real-life Betty Lynn.

The actors are gone, as all of us will be. But they left us the characters they created, who will always be alive. And so, Mayberry lives on.

Goober says hey! And lots of luck to you and yours!