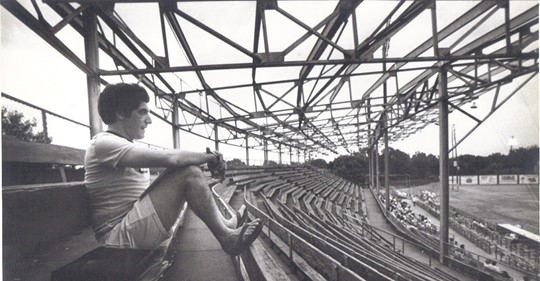 This is the final chapter of what’s basically an online book written by retired sportswriter/copy editor/DW’s former boss Nico Van Thyn called That’s the old ballgame Shreveport. The picture is of Nico as Shreveport Journal executive sports editor covering a Shreveport Captains game at the old, roofless SPAR Stadium in 1982. The photo was taken by yet another stud, our old friend Louis DeLuca. You can enjoy the whole book at nvanthyn.blogspot.com

Baseball was my first American sports love, and it still is.

Over about a 40-year period — boyhood to middle age — those were our teams.

The Gassers and all those previous team nicknames? Too soon.

The Swamp Dragons and the independent teams that followed? Too late. By the time they came along, we had left town. Soon, so had professional baseball.

Too bad, and kind of sad.

The players who represented professional baseball in our hometown,  who wore those white home uniforms with “Sports” or “Captains” across the front or the (usually) gray road uniforms with “Shreveport,” those were our boys of summer (young men actually, although some were close to 40).

And the ballparks, those were our home parks. Countless hours spent at each of those places.

First, Texas League Park-turned-Braves Field-turned SPAR Stadium — never “beautiful,” but functional through the 1950s and ’60s and a decaying facility in the 1970s that was  a near-wreck into the mid-1980s.

Then, the new concrete Fair Grounds Field, so nice at its opening in 1986, so visible from Interstate 20. And for 17 years, home of Shreveport’s Texas League team. For another nine, home of independent-league teams.

And then gone … a pro baseball void in Shreveport-Bossier that soon enough will be a decade long.

A ballpark still standing by I-20, but — honestly — an eyesore, even from a distance. Can it be put back into playing shape? Doubtful. Too expensive, too much negativity.

Maybe someday … a fix, or a new ballpark. Difficult to see it in the near future.

But once upon a time, following those Shreveport teams was a magical journey for us, and a totally unexpected one. Because before 1956, baseball indeed was a foreign subject for me.

We came across the Atlantic Ocean on a boat as 1955 became 1956, and the hottest topics that first year in the U.S. were Elvis Presley, Mickey Mantle, Ike and, for us, the Mickey Mouse Club.

To think, the Brooklyn Dodgers — for the only time in their history — were the defending World Series champions. Did not realize then how much misery the New York Yankees had dealt them over the years.

But Dodgers, World Series, Mantle, Yankees? All new to me. Baseball? Did not know the second thing about it.

The first thing: It was a game that in the old country, The Netherlands, was called honkbal. A minor sport there. We had read (in Dutch) about it, but never seen a game.

The kids on the elementary school grounds here, though, played baseball at recess and speedball — same game, rubber ball (a bit bigger than a hardball). So, after rudimentary introductions to speaking, reading and writing English, came some of the basics of the game.

Found out a couple of things pretty quickly:

(1) Hitting a ball with a wooden bat was not all that easy, especially when — as Bill McIntyre would write in The Shreveport Times a few times in future years — pitches were fired in anger;

(2) If you lined up in the catcher’s position, without benefit of a mask, and got too close, the wooden bat could hit you in the face. A few weeks into the experience that meant a severe black eye, but luckily no further damage.

Slowly that first spring and early summer, we would begin hearing about the Shreveport Sports. A professional baseball team in our city, and Dad’s company had tickets for games at the stadium. His bosses, hearing of the son’s sports interests, suggested we take the tickets and go to a game.

We lived close enough to the ballpark in the old Allendale neighborhood that — without benefit of a car — we could walk, and be there in about 20 minutes. Down Southern Avenue toward town, across the railroad tracks, and soon enough, a few blocks away, you could see the stadium light poles behind the fence in right field.

Can close my eyes and see that scene, and remember the thrill. It was almost — not quite, but almost — like going to Olympic Stadium in Amsterdam (also within walking distance of our little house there).

Recall going in the front gate and then seeing the ballfield and the stands, the Sports in their home white uniforms, the Dallas Eagles in the visiting grays. The date — researched  this in The Times files — was July 8, the only Sunday game the Eagles played in Shreveport to that point in the ’56 season.

And I know, I remember, it was the Eagles as the visiting team.

Do not think, however, that I was aware of how special a season 1956 would be in Shreveport, or how special one player — home-run hitting phenom Ken Guettler — was that season.

By that Sunday, Guettler had hit 33 home runs — past the halfway mark of the Texas League record (55).

He did not hit one that Sunday, but he would make history, earn his forever place in Shreveport baseball lore — and make the cover of this book.

No one was more enchanted by baseball than I was that day. It was instant love.

Maybe it was the first inning — Dallas scored three runs, then Shreveport scored five. (The Eagles ended up winning 8-6, but that did not matter much to us then.)

Could not always figure out exactly what was happening in the game (although it was easier to learn than American football), but I loved the pitcher-batter battles, I loved the speed of the baserunners, loved the mixture of white-and-gray uniforms — and loved the red and blue trim of the Sports’ colors (especially the two-tone hat) with the “S” logo.

Along with the Sports, I found another favorite team because they were on television a lot — once we got a TV — and in the news. The pinstriped home uniforms were unique, eye-catching. Lots of interest, I discovered, in the Yankees and especially the center fielder, No. 7. It would be Mickey Mantle’s greatest season, so it was natural to become a fan of the player and the team.

Think we went to one more Sports game that summer, but by the next year, Dad’s company had box-seat tickets, so we went often — although attendance had fallen off dramatically — and I remember Dad proudly leaning over the railing on the third-base side to scoop up a couple of foul-ball grounders. Never an autograph seeker, I took those baseballs and used them on the playground.)

By the next year, I had a Shreveport Sports cap and a yellow-and-blue Sports T-shirt.

It was disconcerting to learn that there would be no Sports in 1958; the ballclub left town. Did not really understand the reasoning then — a ban on integrated games was a huge issue — but was delighted when the Sports’ franchise came back to life in 1959 … in the Southern Association.

So, it was the 1959-61 Sports — a Kansas City Athletics’ farm team — with which we most identified. Found a player who, other than Mantle, became a personal favorite — a 19-year-old second baseman, Lou Klimchock, “Baby Lou” to the Shreveport media.

He was terrific that season and he wore uniform No. 4 for the Sports. And for the four years in which I played at baseball — not well, at all — my uniform was No. 4. (Also liked the Yankees’ No. 4, Lou Gehrig, subject of the first book I read in America.)

Those Sports players — Peden, Posada, Grunwald, Slider, Ward, Hankins, Hunt, McManus, Howser, Wickersham, Spicer, Pfister, Blemker, Black, Davis and Davis, Parks … I could go on and on — were magic for me. Followed their career paths in their years after Shreveport.

Tough to see the ballclub leave again after 1961. But the ballpark became a close friend — as a scorekeeper for high school, American Legion and recreational ballgames, and sometimes P.A. announcer, too.

When pro ball returned in 1968, I was a college junior and one of our Louisiana Tech friends, basketball-baseball star George Stone, started the ’68 season pitching for the Shreveport Braves (in the Atlanta Braves’ organization). As he commuted to home games, we came with him several times in the early season.

He was on his way to the major leagues; that year, in fact. I was on the way to a sportswriting career.

That summer, 1968, among the assignments as a Times intern a half-dozen times was coverage of Shreveport Braves’ games (with that came the official scorer role). The next summer it was a fulltime position — and frequent Braves/Captains stories and columns for almost the next two decades.

From that standpoint, it was less being a fan and more being a reporter. But still, it was — as it had always been — a point of pride in seeing Shreveport in the standings (yes, it was in bold in the newspapers). It looked especially good at the top of those standings.

However, I always felt like a jinx for Shreveport teams. In the years I lived there (1956-1988), there were this many league championship teams: zero.

In the four years before we arrived, the Sports won two Texas League playoff championships (1952, 1955) and one regular-season championship (1954). Two years after I left for good, the Captains won the first of back-to-back championships (1990-91), and then they won again in ’95.

Another point of pride was identifying former Shreveport players and/or managers as they moved on, many to the major leagues, some as big stars. For a short time in their lives, they were our guys.

It was tough, but understandable, to see the demise of pro baseball in Shreveport starting in the year 2000 when the ballclub — mostly locally owned for some 25 years — was sold to corporate interests. Personally, the independent-league teams that followed were not of much interest for someone living out of state.

But the game endures, without a team in Shreveport. So do memories.

And so does the love for a baseball past in a place that meant so much to us.