There’s a picture hanging on the wall of Kent Lowe’s office on the fifth floor of LSU’s Athletics
Administration Building, one that’s easy to miss amid the 33 years’ worth of mementos and
memories that are scattered about.

It shows a slightly younger version of “The Professor” in 2006, up several steps on a ladder that
put his head even with one of the basketball rims at the Georgia Dome. Scissors in hand and
with a grip on a piece of the net, Lowe was celebrating the Tigers’ unlikely win in the NCAA
Regional and its upcoming trip to the Final Four.

“The only time I’d ever been to the Final Four was as a fan back in 1982 when it was in the
Superdome, when Georgetown and North Carolina played,” Lowe said. “I always said I’d go
back with my team if they made it.”

The Tigers of coach John Brady did just that, upsetting Duke in the regional semis and then
beating Texas in overtime to earn a trip to Indianapolis.

The photo itself isn’t unique. It’s a scene that plays out repeatedly every season with basketball
teams who achieve some level of championship, and the cutting of the nets is as symbolic of
victory as anything in sports.

It’s who’s in the picture that makes it special. It’s a ritual usually reserved for players and
coaches, those who in the public eye were most responsible for the victory that preceded the
celebration.

Not a lot of sports information directors ever climb that ladder. But long-time LSU associate
athletic director for communications Michael Bonnette and SEC associate commissioner, and
former LSU SID Herb Vincent, knew someone who deserved that moment, and went to Brady
amid the post-game hubbub.

“It was chaos down there,” Brady said, “but Kent needed to climb up there.”

The next thing Lowe knew, Tiger standout Garrett Temple had him by the arm and was all but
dragging him onto the court.

“I was doing what an SID does,” Lowe said. “I’m getting ready for postgame, setting up
interviews, figuring out who’s going to the press conference, things you have to do. My mind was in a daze thinking of everything that has to happen with us now going to the Final Four. But here’s Garrett and Tyrus Thomas pushing me up the ladder to cut the net with everyone else.

“Most of the media were taking bets that I was going to fall off the ladder.”

“I told Michael and Herb that if he falls, I’m not catching him,” Brady said. “But seeing him up
there, that’s one of my fondest memories of that whole run.”

The fact that Lowe was a part of that celebration says volumes about who the Shreveport
native is, and what he has meant to the LSU athletic family and to many other athletic
communities in Louisiana dating back to the early 1970’s and his first journalistic endeavors at
Shreveport’s Jesuit High School (now Loyola).

Because of those contributions, Lowe is one of the 11 Class of 2020 recipients of Louisiana’s top
sports honor, and will be inducted into the Louisiana Sports Hall of Fame along with receiving
the Distinguished Service Award in Sports Journalism. The Induction Celebration is June 24-26 in
Natchitoches.

For many, it will be a first-ever trip to the state’s sports shrine and a first-ever experience with
the LSHOF Induction Celebration. Not so for Lowe, who has been an integral part of propelling
the Hall of Fame into prominence through his 17 years of volunteer work with the broadcast of
the induction banquet and other activities.

“Volunteer,” in this case, is not nearly a strong enough word. Lowe was the driving force for the
broadcast from the start, steadily upgrading from a one-hour tape-delayed package into its
current full-blown live broadcast over regional television partner CST.

“This was the ultimate goal,” Lowe said of the telecast that he himself hosts along with
Louisiana broadcast legend and now fellow Hall of Famer Lyn Rollins. “One day I knew this show would be live and I’m really proud of what we’ve done with these broadcasts. We’ve come a
long way since 2003 with this.”

Coming a long way is nothing new for Lowe, who made as big a career jump as anyone on
Louisiana sports media history in 1988 when he left the staff at Louisiana Downs racetrack to
join the LSU SID staff.

Lowe had been a part of the Shreveport media scene even when in high school, working with
the Shreveport Times, and local media involvement increased while he was earning his degree
from LSU-Shreveport. He also turned a passion into a media function at the times when he
began a regular bowling column – something he continues to this day with the Baton Rouge
Advocate. 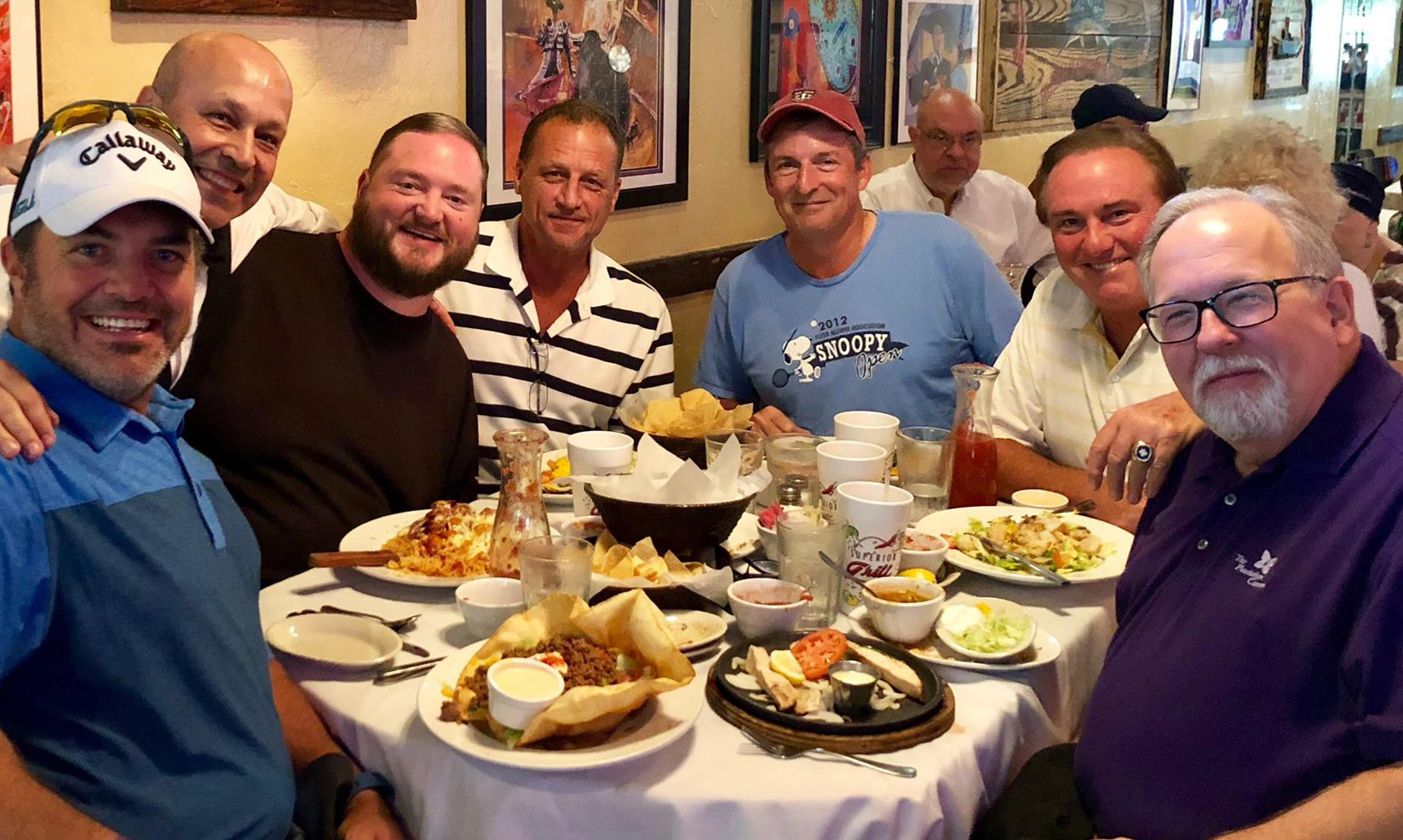 His involvement also continued when he went to LSU for graduate school when he was the
Times’ LSU beat writer until earning his master’s degree in 1982.

Not long after that, fellow bowler and then-Louisiana Downs public relations director Bob
Forrest gave Lowe a suggestion during one of their league nights. The Downs – one of the
nation’s elite racing venues at the time – had an opening for a writer.

“I’d always enjoyed horse racing, my dad and I had gone to the track a lot during the summers,”
Lowe said. “It was a seasonal position and I interviewed and they hired me. I’d go to the barns
in the morning, visit with trainers and find out things that were going on, basically do the press
notes.”

At that time, Louisiana Downs drew daily writers from the two Dallas and the two Little Rock
papers along with the two Shreveport papers and the Daily Racing Form. Lowe got the chance
to work with many national racing writers and journalists, especially when the Downs’ “Super
Derby” was among the nation’s premier events. It was a rare weekend when the facility hosted
fewer than 15,000 racing fans.

“I was learning a lot,” Lowe said. “I knew the generalities of racing, but a lot I learned on the
fly.”

That writing post morphed into many other duties, including live radio shows and television
production when Lowe became the track’s broadcast director. In 1984, his production of live
stakes broadcasts on KWKH Radio was an honorable mention pick for an Eclipse Award.
During that time, Lowe also was integral in broadcasts of the Shreveport Captains, which at the
time were the envy of minor-league baseball franchises across the country. What began as the
airing of live action on monitors next to the concession stands morphed into full-fledged home
and road game broadcasts, where he worked with another fellow Hall of Famer in Louisiana
Tech broadcast legend Dave Nitz.

“When the Captains moved into their new park (Fair Grounds Field) in 1987, we had a lot of
really innovative things going,” he said. “We had young kids, high school and college, running
the cameras, but we were going at it from every angle learning as we went. We did replays,
pre- and post-game shows, it really developed into something that was exciting to do.

“The joke was that I’d do the final race at Louisiana Downs, write the recap, and then bolt
across town for a 7 p.m. first pitch for the Captains.”

It was a fun time and an incredible learning experience, but things were changing.
“Texas had gotten racing, and there were all the rumors of casinos coming in,” Lowe said. “You
could tell the magic was starting to leave the Downs some. And I’d always said that the one
place I’d leave my hometown of Shreveport for was LSU.”

Lowe had gone to LSU with Vincent and got a call in 1988 from his former classmate, who had
just been named SID in Baton Rouge, asking about his interest in joining the staff with men’s
basketball as his primary focus. A few weeks later, Lowe was packing his car and heading to
Baton Rouge.

Since then, five different Tiger coaches grew to appreciate his many talents, but more
importantly they experienced his loyalty and dedication. From Dale Brown’s historic run to the
current regime of Will Wade, Lowe was — and is — the caretaker of LSU’s basketball legacy.
“I’m always asking him for extra stuff that he has to dig up or find,” Wade said. “I can call him
out of the blue at 10 o’clock at night and he’ll have the answer by 10:30. He’s always there
ready to help.”

“Working with Kent makes my job so much easier,” said LSU broadcaster Chris Blair. “If I need a fact about LSU basketball he’s got it. He’s better than Google. More times than not he knows
the answer because he was actually there to witness it. But he’s also a joy to be around, and
that’s the reason he’s so well loved and respected across the state and the country.”

Blair now works with Brady on Tiger basketball broadcasts, adding to the relationship that
Brady and Lowe formed during Brady’s 11-year coaching run that peaked at the 2006 Final
Four.

“When you’re coaching you don’t see all this,” Brady said, “but I never realized how much Kent
was respected and loved around the league until I started doing the radio. It doesn’t matter
where we are, they all want to come over and speak and talk to Kent. He’s endeared himself to
so many in the SEC and all over the country, and that’s because he’s very good at his job, but it
also speaks to the type of person he is.”

Brady admits he had some misgivings at the start, when he had to replace the legendary Brown
– a man that Lowe admittedly idolizes. But it wasn’t because he ever doubted Lowe’s abilities
and work ethic.

“He just loves Dale,” Brady said, “and for me to follow him, I know that was tough for Kent. But
Kent never made me feel like I was anything but the most important thing in the world to him
at the time. Dale’s personality was as big as any room you could go in, but I always respected
and appreciated that I wasn’t just ‘the next guy’ to him.”

That’s one of the reasons he was up on that ladder 14 years ago.

“He’s special,” Brady said. “Nobody’s ever deserved this any more than he does.”

Shreveport native Kent Lowe is this year’s recipient of the the Distinguished Service Award in Sports Journalism for the Louisiana Sports Hall of Fame.