Heart of a Tiger

The New York Times ran a two paragraph obit on Don Redden of Monroe’s Ouachita High and LSU on March 9, 1988. Don was a basketball player of note at the time, still in the public consciousness — his was one of those March Madness stories from just two years before that make this time of year so anticipated.

So the NYT ran the obit because of what he’d done two years before — and because he was the classic athlete dying young. Of an undetected heart condition, we found out days later. He was only 24.

I got to know Don well when I covered LSU for the Times-Picayune in New Orleans. At the bottom of this is a column I sat in the Pete Maravich Assembly Center and wrote the morning he died. The SEC Tournament would be played there in a couple of days; it was a surreal week, for a lot of people.

Don was the team captain of the memorable LSU team that enjoyed a captivating run to the Final Four in 1986. He averaged 13 points a game that season for the Tigers; in the Southeast Regional, he averaged 20. He raised his game, and the Tigers rose with him. Less than two years later, those teammates would attend his funeral.

LSU was the first 11-seed ever to make the Final Four. There have been three double-digit seeds to make it since: George Mason in 2006 (the Patriots’ coach that year was Jim Larranaga, who is now at Miami; Eric Konkol, one of Larranaga’s assistants at Miami, is now head coach at Louisiana Tech, and one of Konkol’s assistants now is Tony Skinn, the Patriots’ starting point guard during their Final Four run); also the 2011 VCU Rams, and 10-seed Syracuse in 2016.

LSU finished the 1986 season 26-12 overall, 9-9 in the SEC. The overall record looks good, but it’s deceiving. The Tigers won their first 10 games, then went 16-12. Went 8-11 in their last 19 games. Finished fifth in the SEC. They lost players to academic ineligibility and transfers and quitting. Ricky Blanton, a 6-6 sophomore guard, was moved to center, a position 7-1 Shaquille O’Neal would play three years later. The Tigers had to reschedule a game with Auburn because they didn’t have enough healthy players after the whole team was quarantined due to chicken pox.

Still, the Tigers got an at-large bid…And an 11-seed in the Southeast Regional. And then…

LSU beat No. 6 seed, Purdue, 94-87, in two overtimes, then No. 3-seed Memphis State, 83-81, both at home. (The NCAA quit the home tournament games after that.) Then, in Atlanta in the Regional finals, they beat No. 2 seed Georgia Tech, 70-64 — again, IN ATLANTA — then No. 1-seed Kentucky, 59-57. Don was voted the Most Outstanding Player of the Regional. And the Kentucky game…Kentucky was the biggie. If you’ve forgotten, that’s the game that Blanton is running back down the court with his arms swatting the air, windmilling the air, in pure joy, after giving LSU a four-point lead with 11 seconds left after a layup — on a pass from Redden.

And LSU beat them. With Blanton, a 6-6 sophomore guard-turned-center. John Williams scored 16, Redden 15, Blanton and Anthony Wilson 12 each, and Derrick Taylor 4. The LSU bench had 0. Hello, Final Four.

Louisville would win it. The Cardinals beat LSU 88-77 in the semis — both Redden and Blanton later laughed and said they of course wanted badly to win but Louisville was much better than they were — and then Duke, 72-69, in the Finals. Louisville earned the national championship.

But it’s the LSU team, if you are of a certain age, that you remember from that March Madness madness. Dale Brown would say later that his Tigers made it to the Final Four “on the broad shoulders and big heart of Don Redden.” Blanton, who had no better friend than Don, said this: “When you come in as a freshman, a guy takes you under his wing; Don Redden was that guy for me.”

Blanton was the captain of a 1987-88 team that finished the regular season an average 15-12, 10-8 and fourth in the SEC. That team lost four straight in February before beating Florida in the finale. Don died two days later—and three days before the start of the SEC Tournament — in Baton Rouge.

Blanton didn’t practice or watch film or attend the scouting report session with his teammates for LSU’s opening SEC tournament game against Vanderbilt. He didn’t know if he could be a pallbearer for his best friend one day and play a basketball game the next. 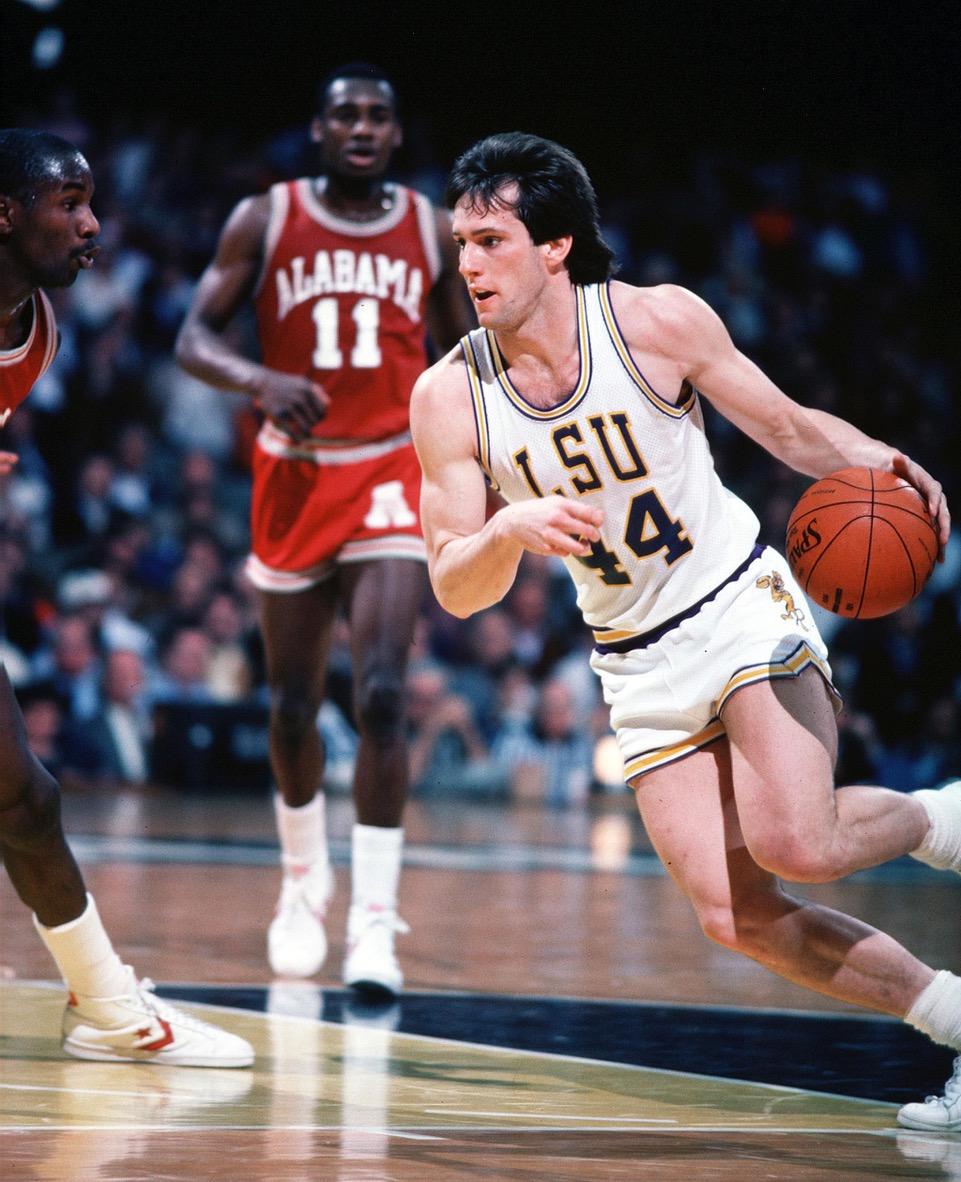 But he did. Played the full 40 minutes. Scored 30 as LSU beat the Commodores, 87-80. Then he walked into the stands and handed the game ball to the parents of Don Redden.

Kentucky beat LSU, 86-80, the next day on their way to winning the tournament. Six nights later, in Hartford, Conn., Georgetown, seeded eighth in the East Regional, beat the Tigers, seeded ninth, 66-63 in the first round of the NCAA Tournament; Hoya guard Charles Smith threw up a shot from between the time line and halfcourt line and close to the out-of-bounds line that banked off the glass hard and went in.

Bernard Woodside, arguably LSU’s best defensive player, was on him. When the ball fell in, Woodside, his arms still raised and wearing a look of shock and disbelief, looked at Dale Brown, who just shrugged his shoulders as he walked to shake John Thompson’s hand.

Because sometimes, there’s nothing you can do.

THE HEART OF A TIGER

BATON ROUGE—It’s nearly noon and LSU’s Assembly Center is quiet. Every now and then someone will walk though, mostly maintenance people preparing the arena for the SEC Tournament. Other than that and the tapping of the keys on this computer, the only sounds are in my head. Those are getting louder.

They said it was a heart attack, and I don’t understand how that could be. His heart was full and strong and good. Heart was what made Don Redden such a good basketball player. And heart was what made everyone who knew him know he was someone special.

Heart was the best part of Don Redden.

He was always in the newspapers for what he could do on the basketball court, but the games I actually saw him play I can count on my fingers. It was away from basketball I knew him best. It was evenings on the porch with buddies or in a booth eating cheeseburgers or riding in his pickup truck.

Playing basketball was just something he did now and then. Having heart was something he practiced all the time.

The gym is quiet this morning, but I’ve heard it explode after a Redden jump shot. I can see him running back down the court, arms pumping in the air. No one loved the competition, the battle and the winning more than Redden. He had the heart to play the game as well as the good Lord gave him talent to. He didn’t cheat on his gift.

I thought this might be a good place to sit and think about him because he made himself and a lot of other people happy here so often. But it could have been the gym back at Ouachita High in Monroe, where his name started to grow. Or it could have been the driveway at his home, where he’d shoot basketball before leaving for elementary school in the morning and then again until dark in the evening, all the time dreaming of getting here and then to the Final Four.

All that eventually happened because he had the heart to make it so.

I just looked at my watch and I guess it was 15 minutes ago I started writing this. But the time reminded me that 24 hours ago nearly to the minute I walked into a little grill on Nicholson Drive and Don was sitting there waiting for me to eat lunch. He looked the same as always, smiling and healthy and happy. The only difference was he had on a coat and tie because of his new job, and I told him to wear a T-shirt next time so I’d recognize him. Joking, he asked me about plugging his new insurance job in the paper, and I said during the SEC tournament I’d write something like “this guy or that guy could shoot almost as good as former LSU star Don Redden, who, by the way, would appreciate your business and can be reached at this number.”

And then here his name shows up in the newspapers for all the wrong reasons.

He told me he had stopped dipping tobacco two weeks ago and reminded me of a story I wrote about him during the Final Four season. There was a line about the crease the tobacco can made in his hip pocket, and that was his favorite part of the whole story. Don was always more blue jeans than coat and tie, more porch swing than Cadillac. He liked it that way, and that’s the way people liked him.

I live farther away from campus than I need to, and he thought maybe we’d buy a house over here, something old that we could re-do and fix up. We figured that would be fine since neither of us spends a lot of time at home anyway. “It’s a good idea,” he said, “if you can stand living with me.”

Lots of people are better off having had the chance to see Don Redden play basketball with so much desire. And others are even luckier to have known him and known he lived the same way he played games, trying all the time to get better, playing and living with a heart he kept strong and full.

It’s quiet in this place except for the one thing I keep hearing. If I could stand living with him, he said.

For people like me who love him, it’s going to be a whole lot harder living without him.