Fair Park: The ‘uncrowned’ champions of 1960

Shreveport native Nico Van Thyn spent almost two decades as a sportswriter for the Shreveport Times and Shreveport Journal during his 40-year career. He is currently a blogger living in Fort Worth. (He is also the Designated Historian, whether he knows it or not.)

Let’s start with the point of this piece: The 1960 Fair Park High School baseball team got robbed … got screwed … got a raw deal.

Yes, it’s been 60 years and to review it now might be pointless. Not going to change history to write about it, but it’s worth not forgetting.

One of the greatest examples of bad sportsmanship at the high school level we ever encountered.

Actually, it was “before my time” — I never saw a high school athletic event until the next year — but for history buffs of North Louisiana and state athletics who learned of this, and or those who remember it, it still resonates.

It was an “infamous” incident in Louisiana sports history.

Fair Park High School in Shreveport is no more, the facility at 3222 Greenwood Road — right across the street from the Louisiana state Fairgrounds — now serves as a middle school.

But not 1960 baseball. Those Indians were — and are — the uncrowned state champions.

They were “eliminated” in the state semifinals. But only because they chose not to play out a terribly unfair situation; they chose not to give in to their opponents’ petulant (and misguided) demands or their juvenile behavior.

The opponent was Istrouma of Baton Rouge, the best-known school for athletics in Louisiana for years.

Two umpires called off what looked like a certain Fair Park victory in Game 3, the deciding game, of the best-of-three semifinal series with Istrouma. Fair Park was ahead 5-0 after three innings when darkness hit, and the umps stopped the game before it became “official.”

The umps — their names were Shelly Carpenter and Perry Wiggins — robbed Fair Park.

But so did the Louisiana High School Athletic Association and its commissioner, T.H. “Muddy” Waters.

Game 3 never should have been started that day (Wednesday, May 11). That was so clear afterward. But not that day.

By the time Game 2 ended, it was 5:20 p.m. Starting Game 3 was the umpires’ fateful decision. That, and not putting a stop to Istrouma’s obvious tactics and even declaring a forfeit. By the rule book, they could have.

Then, the next day, Waters and the LHSAA executive committee refused Fair Park’s protest and they refused to punish Istrouma. In fact, they sided with Istrouma’s demand that Game 3 would be played at Istrouma.

Fair Park asked for the replay to be at a neutral site, suggesting Alexandria. Istrouma and the LHSAA practically laughed that off.

Waters would not intervene. No, he not only backed Istrouma and the umpires, he also blamed Fair Park and he blamed the media for shabby reporting (gee, how original).

He took the chicken-spit way out.

As our old friend Jerry Byrd Sr. would have said: GUTLESS.

(In fact, Jerry did write basically that, as did three other Shreveport sportswriters of the day. And from points south — Alexandria, Lake Charles and even Baton Rouge — there was agreement that this whole thing stunk.) 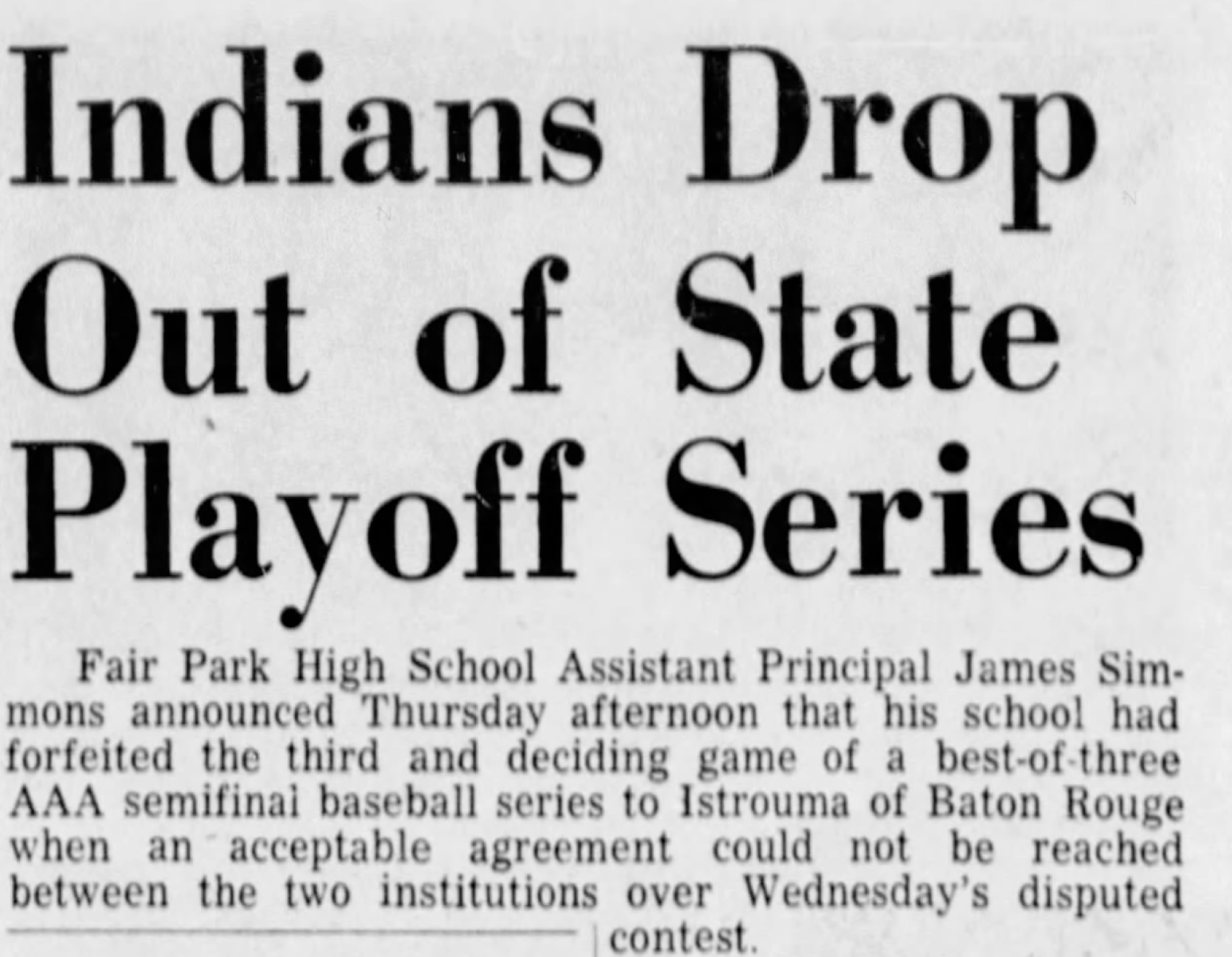 In the best-of-three semifinals series — 2-of-3 was the format for each round of the Louisiana top-class baseball playoff format from 1954 to ’67 — Istrouma won a coin toss and chose to be host for Game 2 and a potential Game 3.

The Istrouma coach was Tommy Bell. He was the real villain here.

He had been a football and baseball star at Istrouma and Southeastern Louisiana College in the early 1950s and would return to coach in both sports at both alma maters. But he gained a reputation — not a good one — with many people on one May day in 1960.

What was most controversial was that when Istrouma felt it was going to lose Game 3, it went into repeated stalling tactics, as directed by Coach Bell.

The attempt was to delay the game as often as could be, stretching it to the point where darkness would force the game to be called.

So twice Istrouma changed pitchers after a pitcher had made only one pitch. Each change required six warmup pitches.

Then an Istrouma pitcher, taking plenty of time between pitches, resorted to trying to walk a Fair Park batter on purpose, just to stretch out the inning. When the FP batter swung at a wild pitch, the Istrouma pitcher hit him with the next pitch, obviously with intent.

So the next two FP batters struck out as quickly as they could, and FP returned to the field for a fourth inning that didn’t happen.

But it was getting late, and getting dark, and the umps said “enough.”

But there were other factors. Rain delayed Game 2’s start for about 20 minutes and then it went 10 innings. Fair Park won it 5-4 as its pitcher, left-hander Sammy LaDatto, held Istrouma to two hits (singles by future major-league third baseman Dalton Jones).

Then, as the Istrouma pitcher was given 10 minutes to warm up for Game 3 (LaDatto stayed on the mound for FP and just needed to loosen up), Andrews and FP officials pleaded with the umps and Istrouma people to have the game played the next day. Denied.

LaDatto again shut down Istrouma’s offense, and he hit a two-run homer in the second to give FP all the runs it needed. But after it got to be a 5-0 game, time — and daylight — ran out. With a stalling assist from Istrouma.

No lights at the field, so no chance to end the game that day.

The Fair Parkers were peeved, getting nowhere with the umps and the Istrouma people, and having been harassed by Istrouma fans. Andrews decided to take his team home by bus, and Fair Park school officials filed a formal protest to the LHSAA.

Waters and the executive committee decided that they could not — and would not — overrule the umpires’ game decisions.

Baseball rules then were that, without five innings played or 4 1/2 (with Fair Park batting as the home team), the game would not be official and would need to be replayed from the start. No “suspension” allowed.

No neutral site. And no Game 3.

Fair Park’s viewpoint was that it had made one trip to Baton Rouge, and would not return. Certainly not to face more potential harassment — and trouble — at Istrouma.

And, so, the 1960 FP Indians were pulled out of the playoffs; it was declared a forfeit. FP took the “moral” victory over the unethical Istrouma choice.

Waters, in a subsequent letter to newspapers explaining his decisions, said he felt BOTH teams were guilty of stalling and that there had been no LHSAA rules violations in this case, so he could not interfere with the umpires’ calls.

More controversy followed the next week. DeLaSalle (New Orleans) wanted to play its home game(s) with Istrouma in the championship series at night.

Then Istrouma won the state championship in a three-game series, losing 2-1 in New Orleans and then winning Games 2 and 3, 7-3 and 6-2, in Baton Rouge.

Istrouma’s stars were Dalton Jones, who signed out of high school with the Boston Red Sox and in four years reached the majors (a nine-year MLB career, six in Boston, three with the Detroit Tigers); and two pitchers, Teddy Payne and Jack Vaughn.

Payne, a lefty, had an 11-0 record and was selected as the Player of the Year” on the All-State team. BUT he was the Istrouma pitcher who intentionally hit the Fair Park batter in the “stall” segment.

Vaughn, a bulky right-hander, was his conference’s outstanding pitcher in the mid-1960s at Southeastern Louisiana. In his senior season, Tommy Bell was his SLU coach.

But Bell lasted only two years on the SLU staff. He subsequently returned to high school coaching in Baton Rouge, then went to prison — financial transgressions — and, after his release, died at a fairly young age. 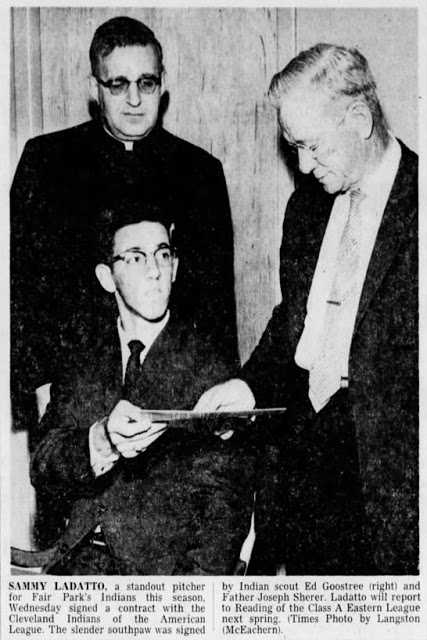 No guarantee that Fair Park would have beaten DeLaSalle in a title series. But Istrouma did, so let’s just make an assumption.

It was a talented Fair Park team; many of the kids were involved in at least two sports, many played in college, a couple in the pros.

Pitching was deep. LaDatto, although his record (5-3) was deceiving, was selected for the All-State team just as he signed a pro contract (with the Cleveland Indians). Two other pitchers, Charlie Johnson (7-0) and Dean Bounds, would go on to be all-conference college pitchers; Calvin Carroll also pitched in college.

The only sophomore starter, Phil Johnson, would go on to be a two-time All-State catcher and LSU’s starting center in football on teams that won Sugar Bowl and Cotton Bowl games.

Labenne, a three-sport star at Fair Park, was a standout football and baseball player at Louisiana Tech.

Wilkinson — “Sam” or “Chief” — also made All-State and played some college ball (Henderson State). He was involved in pro baseball (Houston Astros’ visiting clubhouse manager), then was the longtime trainer/equipment man at Louisiana Tech University.

Outfielder Thomas Mitchell was a two-sport starter and went into coaching, as did a reserve outfielder and future coach of the 1970 state-champion Fair Park baseball team, Doug Robinson.

Even the team’s manager-statistician, Frank “Spike” Bright, was a star. A junior in the spring of 1960, as a senior a year and a day later, he won Louisiana’s Class AAA mile-run state championship. He went on to run in several Boston Marathons.

Andrews was selected as the state’s “Coach of the Year.” He stayed at Fair Park for one more year.

All the honors were small consolation. These Indians’ final record was 22-5. It could have, should have, been 25-5.

What Istrouma did was bush-league. To blame Fair Park for any wrongdoing was ridiculous.

For Muddy Waters and the LHSAA committee to even consider what Istrouma claimed was a misjustice. Sure, Waters denied “being scared” of Istrouma principal Elton “Little Fuzzy” Brown, but he sure as heck sided with him (facts be damned, or twisted).

To blame just the umpires, that was a copout. Weak. What’s fair matters. What’s not fair smells.

Even after only 60 years. Still gripes me.

Fair Park’s uncrowned state champion, yes. A lesson in morality and sportsmanship — or unsportsmanship — to be recalled. A team, and a controversy, not to be forgotten.