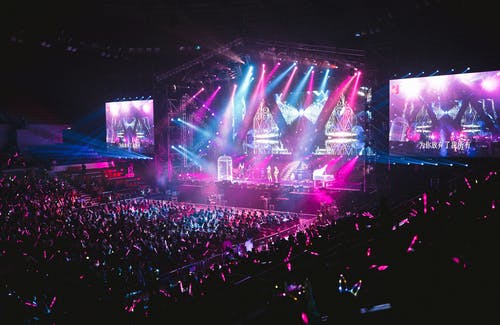 GAGA OVER FISHNET, WRIGLEY, AND RIDIN’ THE RAILS

From our hotel room high in St. Louis, we could see fans by the thousands cruising into the downtown Scottrade Center arena for the Lady Gaga Monster Ball Tour last Saturday night.

The joint holds about 20,000. They tell me every seat was occupied for a high-dollar performance from what is currently the world’s hottest female entertainer. From the outside looking in, I can report that I’ve never seen so many women in short black dresses, painted faces and high heels.

I’ve never seen so many men in short black dresses, painted faces and high heels either.

But Lady Gaga was not the reason for the trip. Nothing against Lady Gaga. I just didn’t want to hand over $175 for a ticket. I wouldn’t pay $175 to see Merle Haggard and the Strangers, and it’s in my contract that if Merle Haggard ever dies, I get a free week off.

For the great unwashed, I can also report that there is no disputing that Lady Gaga can sing, play the piano and entertain. Not all singing stars can sing, you know. She can. And my sources tell me she had the crowd near tears with pleas to “get along” and “love each other” and whatnot. Well said. True, cameras caught her flipping off photographers a couple of weeks ago at a New York Mets baseball game, so maybe she just wants us to get along in American League ballparks. Or maybe she didn’t want the bikini top she’d worn photographed. Or maybe – and this is probably right – maybe flashing what’s usually an obscene finger to press row was her way of saying “We’re No. 1.” But maybe not, since the Mets are six-and-a-half games out of first in the National League East.

Who cares? Even with the poor man’s Madonna in the house, that was not the reason for the trip. Instead, there was an Amtrak train to ride. A St. Louis Cardinals game to see. And a pilgrimage to make to Wrigley Field in Chicago.

I am not saying that trains are the answer to all you travel woes. But I didn’t get frisked, the coffee pot was always on, I could read while making good time, and I never had to pull over to go to the bathroom. Just sayin’…

New Busch Stadium – which Amtrak can get you to in 12 hours from its station in Marshall, Texas, for $71 if you’ll plan ahead a couple of weeks – is a joy. It is also hot. Friday and Saturday, when I watched the Dodgers, it felt like being in St. Louis in July, odd as that might sound. And I sure did enjoy my bacon hotdog, “enjoy” being the superfluous word here.

The next day we met a cabbie in Chicago who said, “I don’t want to live if I cannot drive fast.” My experience from one fare says he might get his wish, though not quite like he’d hoped. He also said he’d retired from road racing. You could have fooled me.

Although we were going so fast I couldn’t really see it, our cab passed the Chicago River and a filming sequence of “Transformers 3.” There was a smashed Buick and an explosion on the oddly named Wacker Drive. At least that’s what our cabbie, joyfully and entertainingly reckless, said. I really don’t know. Unlike our driver, I was looking at the fairly congested traffic that we were somehow morphing through.

Wrigley, as always, was a treat, both outside and in. Before the gates opened and within earshot of a fan in a Yankees cap, a bleacher bum pummeled the name of the recently deceased New York owner George Steinbrenner. Then the Cubs fan said, “Man, I’m just joking. I’m sorry about Mr. Steinbrenner. He was a good guy.” To which the Yankee fan said, “How’s your bullpen?”

The inference: like Mr. Steinbrenner, the Cubs’ pen is fairly dead too.

But Wrigley’s not. I killed three spiders in Section 129, and a man close to us had to move because of a leaky pipe overhead. All the comforts of home. The ivy was green, the joint was packed, the Dew was cheap, the wind was blowing out, and we were breathing it all in.

Heartland baseball in the summertime: there’s you something to go gaga over.